Our news is so preoccupied with local and global disasters that one domain often goes forgotten: Outer space. Yeah, we're so worried about things like hurricanes, global warming, and saving the rainforest that it scarcely crosses our minds that a giant meteor might come along and wreck it all. Or, umm, a black hole, which is basically an exploded star that became a pit of void. (It's a lot more complex than that, but off the top of my head.) 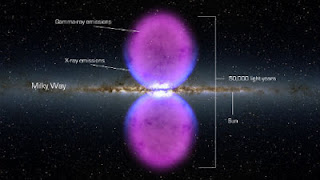 Make that two black holes. Yes, millions of years ago, there was a black hole collision in our galaxy. NewScientist has the scoop:

"A tiny galaxy that collided with the Milky Way spawned two huge bubbles of high-energy particles that now tower over the centre of our galaxy. This new model for the birth of the mysterious bubbles also explains discrepancies in the ages of stars at the galactic middle.

In 2010, sky maps made by NASA's Fermi Gamma-ray Space Telescope revealed two lobes of particles billowing out from the heart of the Milky Way, each one stretching 25,000 light years beyond the galactic plane.

Astronomers suspected the bubbles were inflated by a period of violence in the galactic centre about 10 million years ago, but no one could say what had triggered the outburst.

Earlier this year, Kelly Holley-Bockelmann from Vanderbilt University in Nashville, Tennessee, was discussing the problem with Tamara Bogdanović from the Georgia Institute of Technology in Atlanta.

"We pieced together all the evidence and realised they could be explained by a single catastrophic event – the collision between two black holes," recalls Holley-Bockelmann.

We know that a supermassive black hole weighing as much as 4 million suns lurks at the core of the Milky Way. We also have an array of dwarf galaxies orbiting our much larger spiral galaxy, as well as hints that past satellite dwarfs have collided with us.

According to the new theory, a small galaxy with its own central black hole dove into the Milky Way and began spiralling through our galaxy. After billions of years, the stripped-down dwarf's black hole made it to the galactic centre.

The two black holes then performed a tight gravitational tango before finally merging. This final act produced violent forces that flung out many of the stars that were born in the Milky Way's middle, explaining why astronomers now find far fewer old stars there than they have every right to expect.

The whirling black holes also disrupted giant clouds of gas, some of which got squeezed so much that they collapsed to form clusters of bright new stars. Much of the rest of the gas swirled into the merged black holes, getting so hot from compression that it radiated huge amounts of energy.

"We think it's both the energy from this 'burp' near the black hole and the winds of gas from the starburst that inflated the Fermi bubbles," says Holley-Bockelmann." - Source.

So, to recap: There is a massive black hole at the center of our galaxy. At one point, it collided with another black hole, causing a giant energy burst. The article says this needs more evidence, but it's still pretty scary if it's true. If it can happen once, it can happen again. It may even happen near our planet - who knows?