Picture a hippopotamus for a minute. The image that immediately came to mind was probably one of a cute, chubby animal with a wide snout, huge nostrils, tiny ears, and maybe even buck teeth. Often, they are colored in pastels, as if a chubby herbivore was not cartoony enough.

But wait. Remember, this is the week where "cute" meets "AAAHH WHAT IS THIS I DON'T EVEN!"  That means that, yes, hippos have some insanely dark stories around them. Steve Irwin was able to tangle with crocs and venomous snakes, but would not go anywhere near hippos. That is the kind of nasty we are dealing with.

Oh my, has pop culture misinformed us about hippos. Virtually all that they have gotten right is that hippos (Hippopotamus amphibius)  are found in sub-Saharan Africa, and that the word "hippopotamus" means "river horse." They are also indeed herbivores despite being on this column. That cute, pudgy hippo is still a death machine waiting to happen, and it is not funny in the least.

If animals had stat cards like baseball players, we would be able to see that the hippo is not built for cuddles. It is a massive creature weighing around 8,000 pounds, capable of running 18 mph, and sporting teeth that would sent a pit bull whimpering into the nearest dark corner. Despite having no real armor, a hippo regularly takes damage from other hippos.  Not only are they tanks, they are mean, heavy tanks. Any human who gets between a hippo and her calf are in for a rude awakening. Then death. 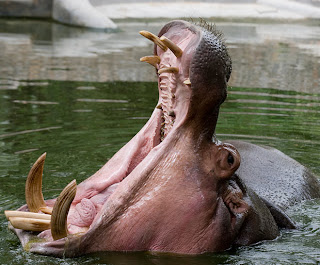 Although a hippo could kill a person by simply by sitting, that is certainly not their weapon of choice. They have been known to capsize boats and, umm, bite people down to their torsos. Hippos have huge, powerful jaws with teeth that pierce a human exactly as well as a rail spike with a ton of power behind it. Vlad the Impaler and Genghis Khan would be proud.

Aside from having nasty tempers, hippos have a few other charming behaviors. As this little dog-bean will tell you, hippo sweat is pink. For a long time, people thought that hippos actually sweat blood; it's really more like a sunblock/disinfectant, and while that sounds like an excellent thing to find at your local Walgreen's, "Hippo Sweat Sunblock" would not leave the shelves. They need this disinfectant for several reasons including another lovely habit called a "dung shower." This is exactly what it sounds like: a hippo whirling dung around with its short tail, preferably over other hippos. And people wonder why hippos are never desired as pets.