So, at the start of this theme week, we covered the rather casually tossed-around term, "pterodactyl." While it is technically a correct term for all pterosaurs, what bugs me about it is that the image that comes with the word "pterodactyl" is usually not a Pterodactylus. It is usually either some messy chimera of a pterosaur or, umm, this:

There is a 90% chance that this is exactly what came to mind after hearing the word "pterodactyl." While all pterosaurs are by definition pterodactylids, the pterosaur that comes to mind nine times out of ten is Pteranodon. That's the beaky, crested fellow. It was around during the Late Cretaceous (when all the cool dinosaurs except Stegosaurus lived) and has been found in much of North America. They were piscivores, likely behaving much like albatrosses. They were a lot bigger than albatrosses, but still not as big as Quetzalcoatlus.

There are two things that are really distinct about Pteranodon: the beak and the crest. Pteranodon's name means "toothless wing;"indeed, just like in a modern bird, there weren't any teeth in that beak. This does not stop artists from adding them in because rawr, dinosaur. That has to be their logic.

The crest is the most varied aspect in Pteranodon as a genus. Although other pterosaurs had crests, Pteranodon had amazingly prominent ones that curved back like the crest of a cockatoo- only immobile. Along with varying in size, the crests also varied with sex. Males had more prominent crests than females. That said, this pretty much cements Pteranodon's role as a visual creature - again, just like a modern bird. 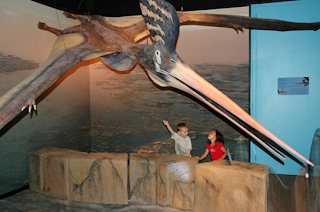 But that's just the basic info. This entry will go one step further from the norm and try to answer the hidden question posed at the start of this week: why are all pterosaurs mentally lumped into the term "pterodactyl," anyways? Isn't that a lot like calling T-rex "tyrannosaurid" or Triceratops a "ceratopsid?" It's a weird, generic term (actually going back farther than the genus, but I digress) that applies uniquely to pterosaurs.

For starters, Pteranodon was a Pterodactylus before it was its own genus. There are a ton of complicated things involving naming dinosaurs. We could just say "the name stuck," but that still doesn't quite explain the popularity of Pteranodon versus, well...other pterodactyls. It may have been the biggest of its time, but if we Chicagoans can get used to calling the Sears Tower the Willis Tower, surely biology classes can update themselves accordingly.

Along with the name "pterodactyl" sticking, Pteranodon's popularity may well lie in how relateable it is. When marketing dinosaurs, one usually won't go for "OMG this thing is weird!" They want "just weird enough." It is easy for our minds to think things like lion = big carnivore, T-rex = bigger, meanier, scalier carnivore, rhino = big herbivore with horns, Triceratops = big herbivore with horns, and so on. Pteranodon is like a big, weird seabird of some sort - see how easy it is to make that parallel?   Tyrannosaurus rex and Triceratops are "just weird enough." So is Pteranodon; it's pretty tame as far as pterosaurs are concerned. (And yet, "Pteranodon" is a lot easier to say than "pterodactyl." Go figure.)

It also helps that there are many complete, in-tact specimens of Pteranodon. We more or less know what a Pteranodon looked like. T-Rex's image has undergone more revisions through the ages than Pteranodon has or will. Until Jurassic Park becomes real, we probably know all that we're going to know about Pteranodon aside from the odd new species to the genus. We know that they had sexual dimorphism, with males being larger than females and sporting larger crests. Yes, we literally know Pteranodon intimately.

I'm not even going to try to list every single pop culture reference Pteranodon has had. If a dinosaur thing has a pterosaur in it, there's a good chance it's Pteranodon or some creature modeled after it.  Instead, have a picture of Rodan, one of the most famous Pteranodon cosplayers ever: 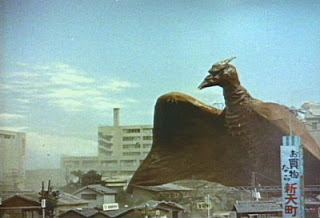 As for the chimeric "pterodactyl" still running rampant? Just treat it as a dragon/wyvern. That's what it looks like, after all.