Sure, they'll never get an awesome story glamourizing how awesome they are at surviving, but you still have to admire that cockroaches are so good at surviving that they've been around, and will be around, longer than we have or ever will.

Oh, and they have evolved to leap. Wait, what?

Yes, in 2011, a leaping cockroach (Saltoblattella montistabularis) - "leaproach," if you will- was discovered in Africa. If it's any comfort, it feeds on grasshopper droppings. Come off it- anyone who has done research beyond the school books knows that plenty of animals literally eat crap. It is not even an inch long, so should you be in South Africa and come across one, there's a good chance you will not even notice its existence. 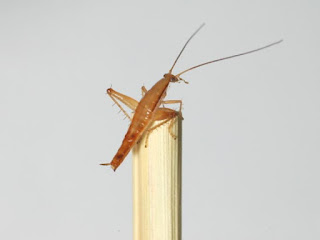 Believe it or not, leaping cockroaches used to be a common thing. Until this discovery, they had not been seen since the Jurassic Period. Part of me also wonders if some of them might have survived long enough to make it into the Bible and appear as one of the plagues in Exodus - even though locusts are totally another creature. This is still a horror-roach that deserves some terrifying mention.

But wait, is it? This cockroach is hardly a pest. It feeds off of the crap of pests, but is not a pest in itself. It's tiny. I daresay it's almost cute. And hey, roaches aren't all that bad; they're just better survivalists than we are. Maybe we should embrace the cute roach and treat it as a peace offering - riiight before the insects conquer us for real. Yeah, still waiting on that.