Speaking of things that should not fly but do...

Flying frogs (family Rhacophoridae) glide (again, not fly) using the webbing in between their REALLY long toes.They live in the more tropical regions of Asia, including China, Laos and Vietnam. (Why is everything I like from Asia? I swear, I didn't know that was where flying frogs came from!)  The earliest reports of flying frogs came from Alfred Russell Wallace, who got the largest species (Rhacophorus nigropalmatus) named in his honor.

Wallace's flying frog exhibits several traits that make it aerodynamic: its limbs are a LOT longer than those of the average frog; its body is narrow; finally, get a load of those winglike feet!

Wallace's flying frog is not only the largest flying frog, but the most photogenic; the markings on its webbed toes look almost like something off of a dart frog's body. Before you all bitch that there is probably an adaptive drawback that keeps the frog from moving, each of its long toes is also tipped with a suction cup. It can climb just fine and escape from tree snakes via the awesome gliding flaps. 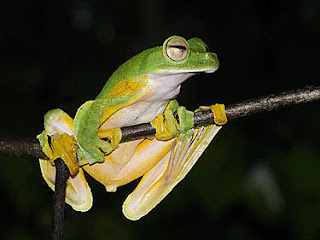 (They also have cool eyes.)


As the video said, there are also extreme kamikaze frogs that jump for their lives when faced with a tree snake. These can be found all over the world; Old World flying frogs like Wallace's are different from the New World treefrogs in that they DO have those amazingly huge flaps for gliding. The ones in the New World are more like the second frog shown in that video.