"They Actually Eat That:" People.

Come now, after Soylent Green at the start of the week, what made you think that "They Actually Eat That" would be safe?

Yes, this week's entry is on cannibalism. The term "anthropophagy" can also be used to describe eating people in general, but cannibalism specifically refers to a member of one species eating another of the same.  It can be seen as a practical solution to world hunger and overpopulation.

If you think that human sacrifice sounds like a cool idea, bear in mind that sacrifices are usually eaten. The Aztecs were notorious for offering human sacrifices to their war god, Huitzilopochtli. After removing the heart, the nobles would then eat the cooked human flesh. They were particularly fond of the hands and thighs.

Suddenly, the rising interest in Mesoamerican culture is a little disturbing.

Willy Wonka: Do you like my meadow? Try some of my grass! Please have a blade, please do, it's so delectable and so darn good looking!
Charlie Bucket: You can eat the grass?
Willy Wonka: Of course you can! Everything in this room is eatable, even *I'm* eatable! But that is called "cannibalism," my dear children, and is in fact frowned upon in most societies.

~Charlie and the Chocolate Factory.

Well, in most cases, they actually ate that. Most of the "cannibal" cultures are either secluded or dead, and 'civilized' people will only eat human flesh out of insanity or necessity.

It's only a matter of time.

There is a perfectly rational, sane reason for not eating people: You know that you can get tapeworms from eating poorly-cooked pork or beef. There is only a mild chance of that, but with human flesh, you are almost guaranteed to get something from your food besides nutrients.

In cultures were cannibalism is prevalent, diseases quickly take hold. The Fore tribe in New Zealand, one of the few remaining cannibalistic tribes, has its own disease called "kuru." Kuru is caught only by eating the brains of another human. The main symptoms are hysterical laughter and shaking limbs. 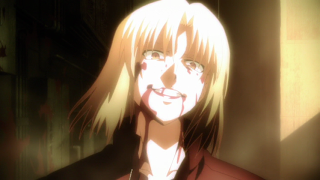 For those curious, kuru is a prion, a pathogen that is just a protein (making it even less complex than a virus). Mad cow disease is also a prion; all of these little bastards attack neural tissue and they are all 100% fatal.

So, despite how tempting it may be...please do not eat people. It's bad for your health.