So, I just got back from seeing Deathly Hallows (Part 1). Nagini's a reticulated python (P. reticulatus). Always cool to see those; they are gorgeous snakes and I wish I could handle one. (Could've sworn Nagini was a Burm in one of the previous movies). Retics are beautiful, but a bit harder to work with than Burmese pythons.

There are some species of snake that barely get any spotlight. Despite sporting not only the longest fangs in the snake world as well as well as being the heaviest viper, the Gaboon viper (Bitis gabonica) is one of them. (As you can probably guess if you know your geography, it is native to Africa.) It is closely related to rhinoceros vipers.

First off, the name "rhinoceros" says "this thing should be badass." The Gabby and a few of its close relatives sport little horns on their noses. They are also amazingly beautiful snakes if you can pick them out from beneath the dead leaves.

These snakes sport the longest fangs in the whole world. Those cobras you see with huge fangs are fake, fake, fake; even the king cobra (Ophiophagus hannah) has short fangs like every other elapid. Sorry, just getting that off my chest.

True vipers are the real masters of the fang world, and the Gabby is no exception. Its fangs are 55 millimeters/2.2 inches long...which is long for teeth. It is also long for venom-filled syringes that will poke through the flesh of your hand like butter if you are not careful. 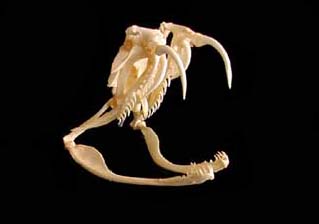 Gabbies are also docile as puppies. Seriously, people have picked up these huge, poisonous snakes with their bare hands and have been able to handle them without ever getting bitten. This is a huge gamble; one bad mood and those two-inch fangs will be in your hand. You will not be able to react faster than the snake, which is known for being quick and unpredictable. Expert hot keepers have said things along the lines of, "I would rather tail a mamba (read: the fastest snake on record) than deal with a Gabby" and "a cobra makes a better first hot."

But it looks so derpy and cute here...

These are the people successful enough to afford antivenins and pure white cobras. I would listen to them.
Posted by KuroKarasu at 12:07 PM