Pterosaurs are awesome. They lived around the same time as the dinosaurs we all know and love, but are not dinosaurs. There are a number of things differentiating them; they had wings, they had fur, and they looked more like bats with beaks than lizards.

Most people know about pterodactyls and/or pterosaurs. If you're lucky, you will find someone who knows the differences between Pteranodon, Rhamphorhyncus, and Quetzalcoatlus - easily the three most recognizable, least intimidating pterosaurs out there. (For those of you curious types, Pteranodon is the big fellow with the crest, Rhamphorhyncus is a lot smaller with a diamond on the tip of its tail, and Quetzalcoatlus is the huge pterosaur with a long neck.)  These three in particular are sometimes blended into a "dragon" pterosaur.

Seriously, Quetzalcoatlus was effing HUGE.  Suck it, dragonhumpers; dragons DID have beaks.

Then there are the pterosaurs that are either so stupid looking or such potent nightmare fuel that few scientists dare to speak their names, like these:


Those are Tapejara, a type of pterodactylid. They lived during the Cretaceous Period alongside T-Rex and the now twice-extinct Triceratops. They have been found in South America and China; believe me, when you see the names on these things, you know which ones were found where. (For example, "Tapejara" means "old one" in Tupi...IA IA CTHULHU F'TAGN?)  Tapejara and its kin, collectively called tapejarids, were known for sporting huge, probably colorful crests.

These crests were anywhere from badass to just plain ridiculous. Don't worry about weight; like birds, pterosaurs had light bones. The color and size of the crest was probably indicative of sexual maturity, but really? I'm surprised that more of them didn't get Irish Elk'd out of existence. (Yes, I just turned an extinct ungulate into a verb.) Modern hornbills and toucans also have pretty elaborate headgear, but they're nothing compared to these guys.

Seriously, how did this thing NOT get blown away by the wind?

If you think you have seen a tapejarid before, you might be thinking of Avatar's Great Leonopteryx.  Leo was almost entirely based off of a tapejarid; check out that over-the-top crest on this alien beast! 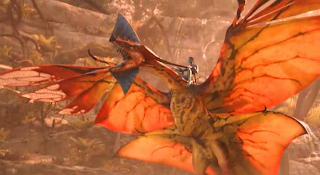 Leo was also a dragonhumper's wet dream, but that's beside the point.
Posted by KuroKarasu at 11:04 AM