Twilight has ruined vampires forever. Sparkling is no excuse to stay out of the sunlight; hell, it would work wonders in a musical. At least nobody has ruined the uniqueness and gothic coolness of vampire bats. 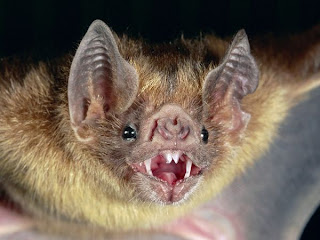 Real vampire bats range from Mexico to Chile - they are not native to Transylvania at all. There are three different species of vampire bat, each being different enough to warrant its own genus (Desmoda, Diamus, and Diphylla - the authoress of Pet Shop of Horrors would have a field day). They are among the few hematophagous vertebrates (sharing the spot with a few fish such as lampreys) and the only blood-drinking mammals.

The blood-drinking lifestyle probably evolved only once in bats. Despite being different species, all three types of vampire bat have similar adaptations for drinking the warm blood of mammals and birds. They utilize echolocation and heat pits similar to those found in pit vipers to locate the nearest source of food. You read that right: These bats have an adaptation best-known in snakes.

Vampire bats do not suck blood. They make cuts with their razor-sharp front teeth and lap up the leaking fluid like little kitty cats. A single vampire bat can weigh twice its usual after drinking its fill, and will often return to the same animal when allowed.

Vampire bat saliva contains draculin (yes, that's what it's called), a substance that prevents the blood from clotting while they feed. It is potent enough to be the preferred anticoagulant for heart attack and stroke patients. A lot of people overlook the necessity of an anticoagulant when designing vampires, chupacabras, or anything else that feeds on blood. The world must be full of hemophiliacs to them. 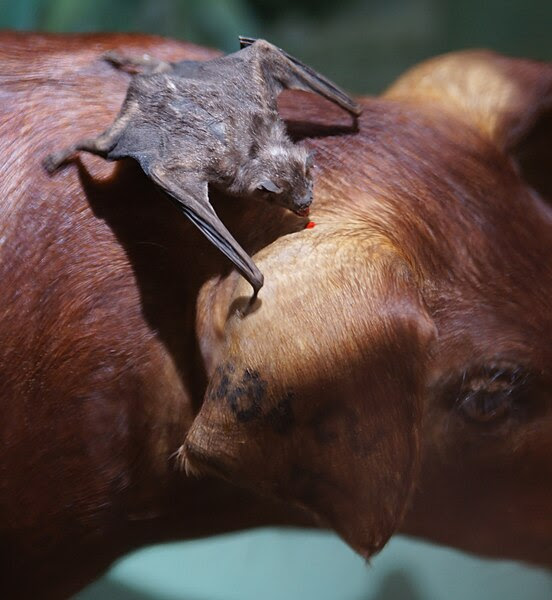 Blood-drinking aside, vampire bats are still cool. They are one of the few bats that can reliably 'walk' on their wings; these bats can walk on their thumbs, jump and hop using all four limbs. Vampire bats are also the most sociable of bats, known to adopt orphan babies and regurgitate a little bit of blood for hungry flockmates. Awww!
Posted by KuroKarasu at 8:10 PM