A lot of focus is put on the giants of the big cat world - specifically, lions, tigers, and anything reasonably large with a melanistic morph. This leaves a lot of felids ignored. True, many of them look like big kittens, but is that any reason to glance over them?

This is an ocelot (Leopardus pardalis). This small-ish wildcat is native to a large area, stretching from the bottommost tip of the U.S. to the rainforests of South America. If this kitty created a sense of deja vu for you, it is probably because its coat resembles that of a clouded leopard - another rarely talked about wildcat. Despite all visual similarities, a full-grown ocelot is twice the size of a domesticated cat and can swim. 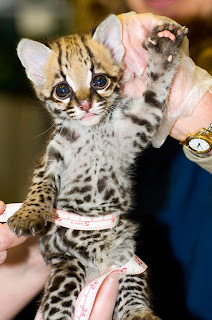 The kittens are still adorable as all D'AWWWWWW~!

The ocelot's status on the endangered list recently went from "vulnerable" to "least concern."They are still protected in many areas due to, in the U.S., being possible roadkill and hunted for their pelts.  Ocelots are generally rare animals.

As its similarity to a house cat might indicate, ocelots can indeed be kept as pets. They seem to be particularly popular with artists; Salvador Dali had an ocelot named Babou, and musician Gram Parsons kept one at his winter home in Florida. These days, most big-name artists prefer tigers (including Katy Perry). If you are the thriftier sort of artist, consider an ocelot.

Dali even took it on a boat.
Posted by KuroKarasu at 7:53 PM