Just because the next themed week starting tomorrow is going to be TRAUMATIZING, here's something relatively cute and innocent: 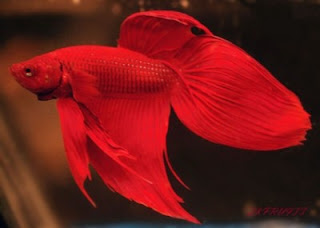 Siamese Fighting Fish (or "bettas" after Betta splendens, which itself derives from the Thai name for this fish) are commonly found in pet stores throughout the United States. They are native to the rice paddies of Thailand, Malaysia and Cambodia. These are the fish that you usually see in little tiny cups at Petco; don't worry, you are not the only one wondering if that's really good for them. The males of the species are particularly spectacular, sporting plumed fins that look like they belong on some sort of swimming bird instead of a fish.


A betta in attack mode.

These fins (along with their gills) flare up when faced with another Siamese fighting fish - or the fish's own reflection! Some people say that stimulating the fish to flare stresses it out, but others claim that it is actually healthy for them. Bettas are not long-lived fish in any case (usually maxing at 5 years).

As you have probably noticed by now, bettas come in a variety of colors and fin shapes. These can range from the relatively tame veil-tail bettas (like the red fellow above) to the weird-but-beautiful double-tail morph. My personal favorite so far is the crown-tail; they look like almost like lionfish, but are not venomous. 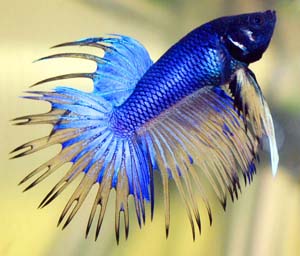 Like bugs in Japan, these fish are fought in Thailand; they look VERY different from the elegant, captive-bred bettas that come in bright colors. Really, huge fins like that would be disadvantageous in a real betta fight.

If you're reading all of this and going, "cool, I want one," well...you can have one. Really. I'm not pulling your leg this time; they make GREAT pets as long as you keep in mind that they are carnivores and make sure the water is relatively hot. They are pretty fish with an amazing variety of colors and fin shapes. You can learn more about keeping them here.

Read this entry well. The next seven will give you nightmares.
Posted by KuroKarasu at 9:33 AM