Even without knowing Greek, you have probably heard of "old kids" - people that are really in their single digits, but look like they should be in a home. It was hinted at when Bart Simpson got a driver's license and said that he had "that disease that makes you an old man" and claimed that he took too much medicine to reverse it. It sounds like BS, but "old kids" really do happen.

"Progeria" is exactly what it sounds like: Early aging. Growth and weight gain are limited from day 1, and the face looks smaller than usual. Like regular old people, progeria victims experience hair loss. The end result looks either like an old person or a real version of the stereotypical alien. 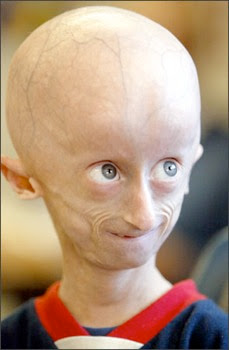 Stack up all the progeria symptoms together and you get E.T.

There are actually a number of diseases that can cause accelerated aging by a failure to repair DNA, but progeria is not among them. Instead, it is caused by a simple switch of one nucleotide (cytosine to thymine) at one specific point, making a defective Lamin A protein. Think about that the next time you take a biology exam; one nucleotide wrong and you wind up an old man. 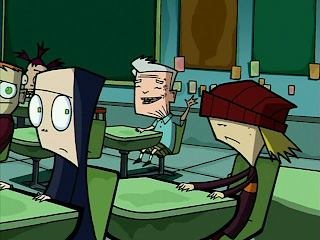 It is also not heritable like those other diseases for one simple reason: The people with progeria never live long enough to have kids. The mutation occurs spontaneously in all forms but one (and that is a subtle inheritance, not like the family of wolf people). Progerians rarely live beyond 13 years of age. Most of them die from heart attack, stroke, or other such diseases.

There is no cure for progeria. You can treat some of the symptoms, but ultimately, this was yet another case in which Mother Nature said "no." Sorry, but if you have this, it is fatal. Growing older is never a good thing.
Posted by KuroKarasu at 11:24 AM