Holy cats. I hate to sound racist, but...wait...are those black people? That video is from the African country of Tanzania, and those people look light-skinned, but they certainly aren't Caucasian. There are other traits that make them look African. Again, no offense meant.

The people in that video up there are albinos. That is not a racist term. That is the exact same sort of albinism that you see in Burmese pythons, that white gorilla, lab mice, and those white frogs at Wal-Mart. It just so happens to occur in people as well. Even so, not all white people, or animals, can be properly called albinos. Why?

Albinism (derived from Latin albus, -a, -um, "white") makes any given organism a lot lighter than usual. It is commonly thought of as the trait that turns animals white, and, as such, tends to be incorrectly oversimplified into "any white animal." It is found across many, many species, from fish to humans.

Albinism is a simple recessive trait - that is, something can be 'heterozygous for albinism.' That means that the parents of an albino progeny will look completely normal. There is a 25% chance of getting an albino baby (of pretty much any animal) if both parents are heterozygous.

What I said up there can be roughly translated into this little box.
Although 'albinism' is the common name for this mutation, 'amelanism' would be more accurate. The mutation stops the production of melanin (Gr. melanos, black), a common natural pigment. As the name implies, it determines the amount of dark coloration on an animal. Since albinism essentially turns that one pigment off (making the organism white), why not get more to the point? As you will see, not all albinos are plain white...but they all lack black pigment.

For mammals, melanin is the only pigment that they have to work with, so they end up being uniformly white. This is not so for birds, reptiles, amphibians, or fish - an albino Burmese python, for example, also has some yellow pigments to play with after albinism. The same also went for that crazy albino retic from my reticulated python entry - it had orange, peach and purple, of all things! A lot of people do not realize that albinism is just one giant PhotoShop tool that Mother Nature likes to play around with every so often.

Tweaking pigmentation is an awful lot like editing a picture in PhotoShop. For mammals, you can only work in a sort of sepia grayscale, but everything else has at least RGB to tinker with. This is why a lot of mammals share similar patterns and colors. When was the last time you saw a bright purple mammal?

Albino specimens also have vision problems. As with the light skin typical of albinos, the eyes also lack (or have very low) pigment. This makes them appear anywhere from light blue to the infamous pink with red pupils. Having pink eyes is not necessarily a criterion, but it is still a good rule of thumb when trying to pick out albinism from other types of whiteness.

That said, it's time for that pop quiz I promised. Which of the animals below are albinos? 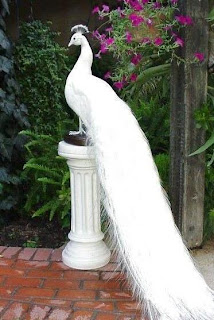 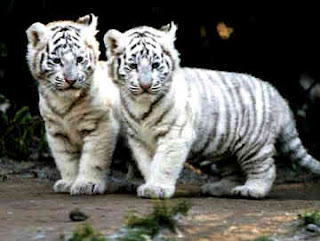 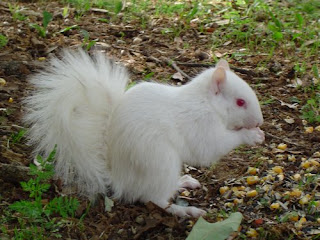 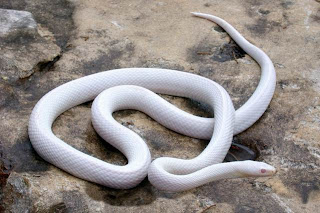 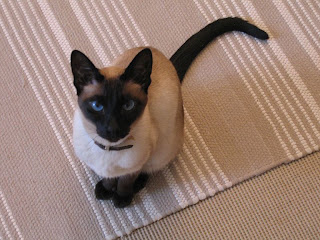 The first two pictures - the white peacock and white tiger cubs - are not albinos. They are different variations of leucistic (from Greek leukos, white). Leucistics have no hard and fast rules or maladies like albinos. Even the heritability of the various leucistic types can vary. There are about a million types of leucism. Unlike normal albinism, leucism gels perfectly well with black.

So, yes, that infamous albino peacock is leucistic. It is hard to see the dark eyes on the peacock, but that it is not albinism is apparent when a white peacock meets and mates a regular blue peacock: 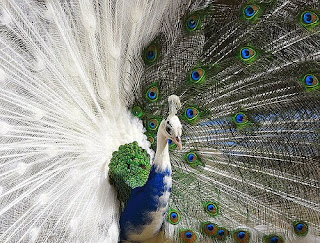 Remember what I said about albinism being a simple recessive trait? Breeding a truly albino peacock to a wild-type peacock should result in all normals that, when bred together, will yield 25% albino offspring. That's not what we're seeing here. Instead, we got a pied peacock due to that particular type of leucism's incomplete dominance. Eye colors aside, albinism doesn't roll that way.

White tigers are not albino, either. I have heard rumors of albino tigers, but the bold black and white specimens seen in Vegas are not albino. If they were truly albino, they would be completely white - the black stripes should be a warning flag. They have a type of leucism with a similar heritability pattern to albinism (i.e. it's simple-recessive). The gene is linked to a trait for severely crossed eyes; all white tigers are at least slightly cross-eyed. There are, supposedly, albino tigers - pure white tigers with no stripes at all - but the evidence for that is sketchy at best.

The squirrel is a real albino. I was not trying anything sneaky with that one.

These last two were trick questions. The blizzard corn snake (Elaphe guttata guttata/Pantherophis guttatus guttatus, depending on your gender today) is part albino, but true albino/amelanistic corn snakes look like something from Woodstock: 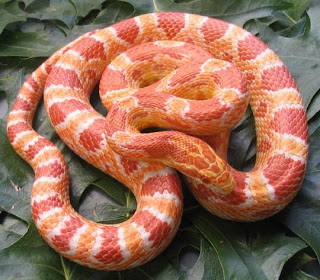 To get a truly 'albino' look, an albino corn snake has to be bred with an anerythristic (i.e. "lacking red") individual. (Since there are two types of anerythrism in corns, I may as well add that, should you desire a blizzard corn, the cross is Anery B/Charcoal x amelanistic/albino. Utilizing Anery A instead yields a snow corn, which usually looks far less pure than the blizzard above. Both are often mistakenly called albinos.) The resulting offspring will all be normal-looking hets for both traits. Breed them again for a 1/16 chance of a whiter snake.

The Siamese cat is also a type of albino. In this case, the mutation is incomplete and temperature-sensitive. Like many albino animals, Siamese cats are susceptible to eye issues - mainly, crossed eyes - and tend to prefer daytime hours because they have poor night vision.

There seems to be a lot of misinformation going around. Keep your eyes peeled for mistakes, and somebody please correct me if I made any!
Posted by KuroKarasu at 1:04 PM