Creature Feature: The Ring-Necked Pheasant and the Prarie Chicken.

Now THIS is a chicken dance.
I know, I know: Why am I doing another common creature? Chickens and pheasants do not sound particularly impressive, but these two have an interesting relationship that is worth a look. 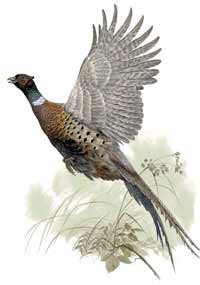 The ring-necked pheasant (Phasianus colchicus) is a pretty bird. As with most galliformes, the male is flashy, while the female is considerably more drab. You have probably seen a million of these birds in old hunting portraits. That's hardly surprising; they have traveled across the world as popular game birds. Wherever humans go, the pheasants go. (Note: As of right now, I have seen no info about these pheasants in Australia.)

Now, meet the Greater Prairie-Chicken (Tympanuchus cupido). It is native to Illinois. The males and females are about the same size, but, as with the pheasant, the males are considerably brighter. Males have bright yellow neck patches, and fill them with air to 'boom' as shown in the video. They are one of the few birds that mate in leks- short, organized competitions to win the hearts of hens. They are very wary of human development; they avoid power lines, and many of the flat areas used for their mating rituals are threatened by habitat loss. 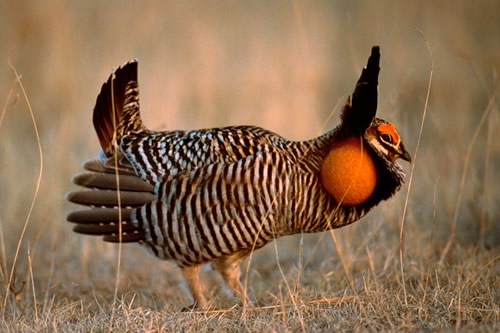 With just a LITTLE more acid, this thing could fit on Pandora.
What the hell are these two galliformes doing on the same page? For the love of green apples, why do they both matter?

Humans have a history of wrecking other species' lives. It's one thing to introduce a species that replaces another's ecological niche, but a whole new level of sick to introduce a nest parasite. Sure, doing so took some burden off of hunting North American birds, but this COULD get as bad as rabbits in Australia.

The prairie-chickens will probably be gone within a decade; enjoy them while they last. Those air sacs and crests on the male could easily be monster fodder. While you're at it, when was the last time that a monster creator put enough effort into their ecology to design interspecific relationships like this? Get creative!

...What? YOU GOT A HUGE, COLORFUL ARTICLE TODAY. Don't complain.
Posted by KuroKarasu at 9:21 PM