(Note: This post was delayed due to Blogger being down. That's a shame; I was rather eager to talk about this one.)

The green anaconda (Eunectes murinus) is one of the most notorious snakes in popular culture. It is the heaviest snake in the world, one of the longest (second only to the reticulated python), and both the longest and heaviest extant boa. They are aquatic hunters; like crocodilians, they have eyes on top of their heads as opposed to on the sides. 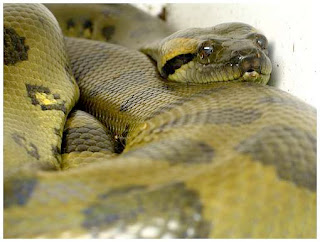 This makes them look dopey, not evil.
I could rant on and on about how the anaconda's reputation has been over-exaggerated. The snake only grows about 20-30 feet maximum. Reports of anything longer may have resulted from tanned or shed skins, which can stretch substantially longer than the actual snakes. Similarly, any reports of man-eating are unfounded and probably false. They make even worse pets than Burmese and reticulated pythons due to their often erratic tempers and specific husbandry requirements.

Besides their massive size, the green anaconda has several other claims to fame. Like all boas, they give birth to live young (or, rather, the eggs hatch inside of the mother -ovovivapary). In all boas, but particularly noticeably in this species, the females are larger than the males. Green anacondas have the greatest sexual size dimorphism of any tetrapod, with females being almost twice as large as males.

This difference in size becomes crucial during mating season. During April-May, a female anaconda will remain motionless as up to 12 males follow her scent. They then proceed to cluster around her in an attempt to mate. Sometimes the biggest and strongest make it to her cloaca; other times, she handlessly-picks the male herself.

Anacondas are not the only snakes to make mating balls; other types of water snakes, such as the red-sided garter snakes native to Canada, have a similar behavior. Garters also bear live young. It has also been reported in a few more land-based snakes, leading to sexual size dimorphism in favor of the female...

...which is why it kinda pisses me off that female constrictors get so little love in popular culture. If any constrictor is big enough to swallow someone, it's probably a female.
Posted by KuroKarasu at 6:05 PM