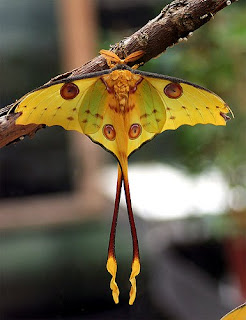 Wow. This is the first thing I've done from Madagascar, isn't it? Expect a lot more; that little island is/was home to a million unique species that all deserve a moment in the spotlight. Most of you are probably well-aware of lemurs - the primates that look kind of like crosses between monkeys and raccoons. Perhaps a few of you also know of fossas, Dumeril's boas, and day geckos. Yes, the little Geico gecko has some cousins on an island dangling beneath the African continent.

Just like us, he refuses to talk about his in-laws. Shame; that could be a GREAT conservation plug!

Why, of all things, did I decide to pick on a moth? A friend of mine wanted me to identify a strange brown moth from the Amazon region. This led to a crash course in Lepidoptera, the order containing butterflies and moths. I want to say that I have narrowed it into the order Saturniidae, but cannot say for sure. I still have not found what it really is, but am definitely not giving up.
This moth was found in the course of my search. The moth in question had the tails typical of American luna moths, so that was one of the places I looked. I had no idea that the luna moth was related to so many other moth species that I had taken a liking to in my bug-studying days, and encountered quite a few new favorites (including, of all things, a moth with bright pink and yellow coloration. Sparklemoth!).

So, if this moth looks an awful lot like one you may have seen near your hometown, it should come as no surprise. Besides the name 'comet moth,' Argema mittrei is also called the 'African moon moth.' It is one of the largest moths in the world, with male moths sporting a wingspan of 20 centimeters and tails of 15. Males are larger and brighter than females. 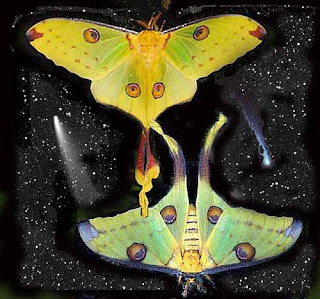 Both sexes look pretty damn trippy, but the male is up top.
Sadly, the comet/African moon moth is highly endangered. The caterpillars of the comet moth feed only on fresh eucalyptus leaves, so deforestation is a big problem. Furthermore, their cocoons are not solid, but meshed to keep the metamorphosing caterpillars from drowning in their humid rain forest climate. As soon as the moth emerges, it has to go mate; it has a short lifespan of 4-5 days, and is only fertile the first day out of the cocoon.

Here's a moth that we do not want to exterminate. Appreciate its beauty while it lasts!
Posted by KuroKarasu at 8:00 PM