In retrospect, I really should have done the anaconda today; Lady GaGa's new video for "Alejandro," a song about a Latino harem, would have fit perfectly. It's almost close enough for me to call synchronicity, but not quite. Tch.

Instead, today's post will be devoted to one of Vegas's most popular residents: The white tiger. Although they've been around for longer than anyone could know, many of us know them from Siegfried & Roy's Vegas performances. Contrary to what playbills may tell you, none of the white tigers seen today are Siberian; they all have some Bengal lineage, which is just one of the many issues that tiger fans and experts like to pick on. There are also a few different kinds of white tiger, but the morph we will be focusing on is the common "white with black stripes" popularized by S&R. 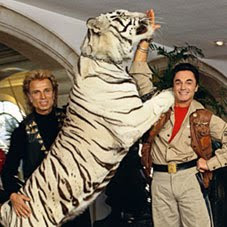 Your hand has a flavor. *OMNOMNOM.*
This common color morph in Bengal tigers is a recessive gene dubbed 'chinchilla albinism.' Despite this, they are NOT considered 'albino' tigers in the strictest sense; a report from 1922 told of an albino mother tiger and her babies, all of which were stripeless with pink eyes.

This version of white-ness was first found in Bengal tigers, and has been in captive collections since the 1900's. This version of white coloration is linked to larger-than-average size, which may have helped it survive in wild populations. The trait is currently extinct in the wild, and even in its heyday would have occurred in only 1 out of every 10,000 Bengal tiger cubs.

It is also genetically linked to crossed eyes. All captive white tigers, due to outbreeding with Siberians and severe inbreeding, cross their eyes when stressed. The trait is getting rarer and rarer, and will probably be bred out. Strangely, this only seems to happen in Bengal-Siberian crosses; it is (was?) rarely observed in pure Bengal whites. 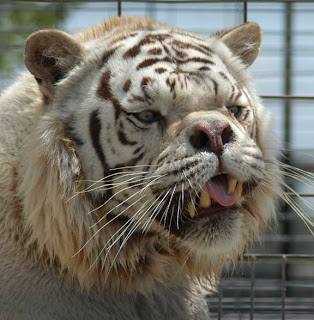 Bulging eyes...squished face...With a little imagination and long fur, and you could market this as a shishi!
Regardless of how much money well-meaning zoos make off of white tigers, there are a good amount of people against keeping them. They have at least one point right: Though exotic, white tigers are NOT an accurate sample of wild tiger populations. These are not the tigers we should be looking at. An exception can be made for Vegas; zoos should really stop showcasing freaks.
Posted by KuroKarasu at 9:01 PM