Everybody has heard of chameleons. Although color-changing lizards are not that unusual, chameleons have become nature's poster animal for changing colors, both to show emotions and for camouflage. Chameleons in general are weird on a number of levels, from their telescoping eyes to their tong-like toes to their curly, prehensile tails. Many of them also have crests and/or horns. All of them can zap flies into their mouths with lightning-fast speed. Due to their extreme weirdness, they are seen as evil by natives in whatever part of Africa or Eurasia they are found.

This is not an entry on chameleons in general. The Jackson's chameleon (Chamaeleo jacksonii) in particular is unique, even among chameleons. It is native to the higher regions of Kenya and Tanzania. There are three subspecies of this chameleon, all of which eat a varied diet of invertebrates. 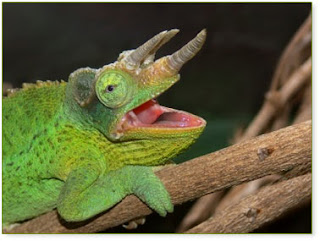 The horns on the male Jackson's above probably got your attention right away. Said horns are only present on the larger males; the females have minimal, if any, headgear. They look like they belong on a prehistoric lizard as opposed to a modern one. Throw in all the other features that make chameleons weird as all get-out and you have an odd creature based on looks alone.

As always, there are more to these lizards than meets the eye. Jackson's chameleons are one of the few lizards to give birth to live young, just like boas and livebearing fish.

They are also an invasive species on all Hawaiian islands thanks to the pet trade. In order to discourage breeding these chameleons, however, it is illegal to both import and export them into Hawaii.
Posted by KuroKarasu at 7:23 PM