Following in the vein of both striped animals and big cats, the lionfish (also called turkeyfish, scorpionfish, fire fish, and a few other colorful names) is a vicious, beautiful predator native to the Indian Ocean. Their range extends all the way out to Japan, Korea, and northern Australia. Yes, everything cool is from Asia.

The term "lionfish" can be used to describe any fish of several genera, many of which include "Pterois" -"wings"- in their names. Small wonder; just look at those pectoral fins! If the arowana looks like an Eastern dragon flying through the skies, the lionfish may well be a wyvern. 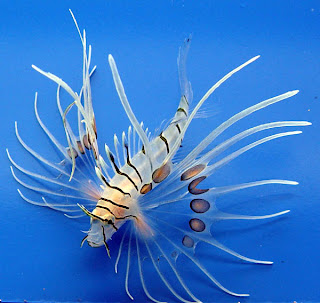 Now to make it glow in the dark...
They eat small creatures such as krill, and are known for, like everything else with a psychedelic paintjob, being poisonous. Although lionfish are predatory, all of my sources assure us that their poisonous spines are purely defensive.

The severity of the venom varies from person to person; of course, medical attention is recommended regardless of who you are. Unlike some of the creatures we've had in our spotlight, lionfish venom is usually not fatal to humans. It still hurts like a bitch. 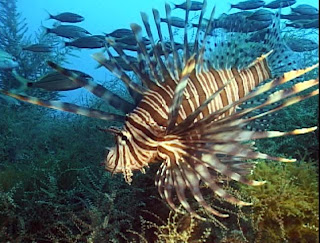 JESUS CHRIST IT'S A LIONFISH GET IN THE CAR!
You might need to know how to deal with a lionfish sting in the near future. Besides their natural range, there have been many reports of lionfish populations in American waters. This sudden population boom has caused scientists and divers alike to worry about reefs around Florida and the Caribbean. To be more precise, there's been a noticeable decrease (of approx. 80%) in the population of small fish wherever lionfish appear. Predictably, scientists are pointing their fingers at the exotic pet trade.

This raises an interesting point: Cats and dogs have been wrecking nature for ages and not too many people seem to care. Same with cows; cattle have been passively the rain forest for a good long time, but no one has done too much about it. In contrast, when a snake or lionfish is involved, scientists are all up in arms. Never mind the impact humans have.

Posted by KuroKarasu at 8:14 PM