I need to stop doing invertebrates. They have become my comfort zone. Things without spines are just so weird that it's easy to add a little more to them, make them HUGE, then send them on a rampage through Tokyo. 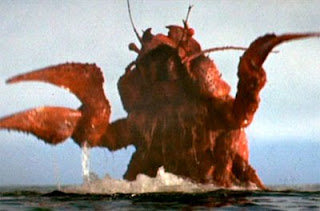 This is what you get for turning my kind into sushi rolls!
Here's something with a spine.

Yes, those little jelly-fish like creatures above are part of Chordata, just like you, me, and that cow in your burger. Tunicates are the most primitive of chordates, only possessing a notochord in their larval stages (if at all). The primitive structures are consumed as the organism grows; much like how one's brain turns to mush if all one does is stare at a television all day, the stationary sorts of tunicate simply do not need their brains and spinal cords. Some types are stationary, some pulse like jellyfish, and some even dwell in the abyss.

The little fellows above are called sea salps (that is not a misspelling). They start their lives as tiny, gel-bodied creatures called oozoids. One oozoid pumps out a swarm of clone-oozoids, and they form a chain as seen in the video. 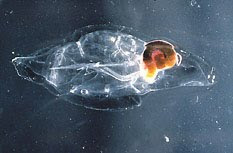 One aggregated into chains, the individuals are called blastoozoids. These chains can be up to 15 feet long, and are frequently encountered around Antarctica. Luckily, salps are harmless; they feed entirely on plankton. 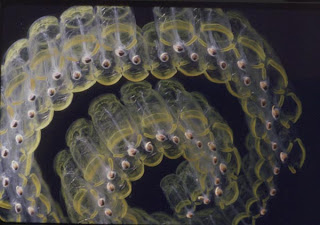 This would be one of the scariest sights in the world if it wanted to eat you.
Sea salps in a chain start as females, then mature into males over time. The females are thus successfully fertilized throughout the chain, allowing more jelly globs into the seas. There's a reason why tunicates are some of the most common creatures in the ocean, but that is no excuse to not study them as we would any other animal.

In fact, recent research suggests that sea salps might be slowing down global climate change. If you ignore the ads here, you might just learn something.
Posted by KuroKarasu at 11:11 PM