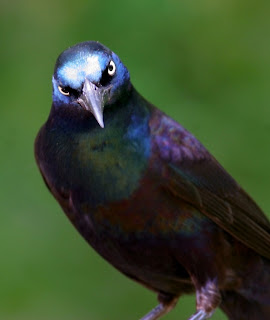 If you live in North America, you probably have not even noticed these birds. From a distance, grackles look like regular, unappealing blackbirds. Sure, their neon yellow eyes stand out, but eh. Black birds with yellow eyes. So what?

Even their names are unappealing. "Grackle" is not a pretty word at all. Grackles do not have pretty songs like some other passerines. The distaste for this bird can be most clearly expressed by the word for a group of grackles: A 'plague.'

One look up close reveals that they are not normal blackbirds. They aren't really black! Like little hidden peacocks, their feathers shine with shades of iridescent blue, purple, and green. Males are a lot brighter than females, enough so that the females are sometimes mistaken for a different species of bird.

They are also noticeably intelligent, and sport a number of interesting behaviors. For example, common grackles practice 'anting'- they allow ants to clean their feathers. They can also mimic other birds or sounds, albeit not as efficiently as mockingbirds. As demonstrated in the video below, grackles can also learn a few tricks:

Believe me when I say that dog food is more appropriate for birds than for dogs.

(Also, hooray for my first North American creature?)
Posted by KuroKarasu at 7:23 PM