Behold the tapeworm, a MARVEL of nature! YT would not let me link this, so you will have to click the text. (For the lulz, note the Shakira interview and "America's Got Talent" alongside flesh-eating parasites.)

Yes, I went from the elegant quetzal to a creature that most people would in horror from. You know how I get with worms; they fascinate me!

Tapeworms (Class Cestoda) are no exception to my love of worms. Remember, parasites have to thrive inside another organism; they have to live through acids and our own immune systems in order to survive. If anything, living in such harsh conditions should be seen with more admiration than mere predation.

All hail the tapeworm. These can grow anywhere from 40-100 feet in length. Long worm is loooong.
The first things that most people notice about tapeworms are the flat segments that make up its 'body' called "proglottids." These, almost like those little sea salps in a chain, can reproduce independently, making some biologists believe that a single tapeworm should be treated as a colony of proglottids rather than a single organism. They can reach chains of up to 100 feet long.

Gravid proglottids usually come out in a host's feces, and lay eggs intended for a different host. Beef, fish, and pork can all contain juvenile tapeworms (cysts) just waiting to get in your gut and start the process all over again.

The head of the worm, called the scolex, is rarely seen. It has suckers and a hooklike 'mouth' that latch it onto the intestinal wall. It also looks like something straight out of an Alien movie: 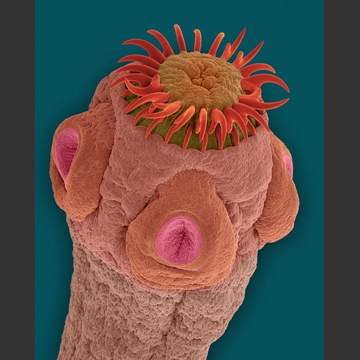 Just as an example of how specialized parasites like this can be, let us look at the beef tapeworm (Taenia saginata). As the name implies, the beef tapeworm spends much of its life in a cow's body, but falls onto pastures via human feces. Once the resistant eggs from a proglottid are ingested by a cow, the larvae spread all around the cow's body from there. The cycle repeats itself unless the meat is either frozen or heated to temperatures that the cysts cannot handle.

Creepy? Perhaps, but also admirable in its own right. Few species accommodate so well to the introduction of domesticated animals. There is even one for puppies, animals hailed as man's best friend. These little guys have found a way to not only infect said animals, but also to make humans part of their wormy complete breakfasts. Hosts usually show no outward symptoms, but some cases result in severe weight loss, decreased appetite, nausea, and dizziness. You may also wind up with bad case of diarrhea, making this Japanese video essential:

Since at least the Victorian era, tapeworms in particular were advertised as a weight loss supplement. Given that many parasitic infections result in a change in appetite and weight loss, it may have worked.

There are, however, several better parasites for your health; hookworms in particular have been known to reduce allergy symptoms. That's a worm for another day.

This, however, has no excuse. It looks even more like a tapeworm with wings in the video games.
Posted by KuroKarasu at 12:58 PM