"Engagingly ugly" describes these birds to a T.

No, this is not about old people. This is about the bird whose name became a slang term for old people.

Eurasian coots (Fulica atra), like ducks, swans, and geese, are water birds. Despite their similar habits, they are unrelated to waterfowl; coots belong to a family of birds called rails (Rallidae), not true waterfowl (Anatidae). They inhabit and are common in Europe and North America, making this the first Creature Feature to ever be on a European animal.

(Had my camera not lost all of its pics, I could use my own images from England for this entry. I thought they were the coolest things ever when I found them in Hyde Park, and took great pains to capture their odd features. They were almost as cool as the swans I got to pet. Unfortunately, my camera flipped me the bird and was being crazy, so I lost over 600 pictures.)

As stated above, the term 'coot' originated from this bird's white, featherless frontal shield. This shield develops after about a year. The chicks, as seen in the clip above, also look like little baby vultures that can somehow swim.

The head is the least strange thing about this bird. Its feet are semi-webbed; instead of having full webs like a duck or swan's, the coot's feet have little flaps that serve the same purpose. This gives them a unique footprint. 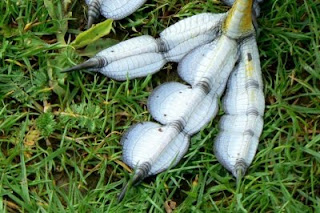 This bird's feet were cool enough to photograph. That's saying something.

Even though the coot is a common bird, it was weird enough to deserve an entry of its own. Look around your backyard for your own oddities!
Posted by KuroKarasu at 1:24 PM