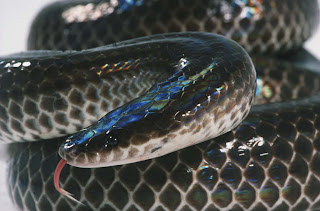 Last night, I was completely blown away by...well, let me put it this way.

You know when you're reading a biology book and they mention a completely random animal as an exception to a rule? Something along the lines of "All mammals have live babies except for platypi and echidnas?" You never have to know that information for a test because it is not the norm. Those two mammals (in this example) are exceptions, not the rule. In this case, thanks to popular culture, you probably know what a platypus looks like already, and maybe have a mangled image of the echidna thanks to hours of playing Sonic the Hedgehog. In any case, unless you're just the type who goes, "huh, never heard of those *Google*" and spend the night before a major test researching exactly what an echidna is, it is not something that you would look up.

The same thing happened with me and sunbeam snakes. They were mentioned, however briefly, in one of my snake books because they refuse to fit in scientific boxes and have fully-functional left lungs. I recently found them, completely randomly, on a Kingsnake.com listing. 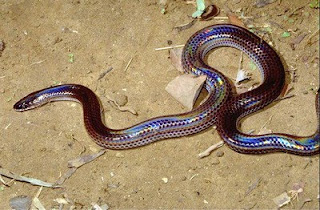 My goddess are sunbeam snakes pretty. They put the rainbow boa (Epicrates chenchria) to shame with their iridescence. A whole rainbow flashes against their dark scales with every coil, and, if I could, I would like to see what a calico one looks like up close. Besides making snakes glow in the dark, it would be awesome to emphasize that, holy shit, these creatures shine with all the colors of the rainbow. Mammals cannot do that.

Although there are only two varieties of sunbeam snake, they are unique enough to have their own genus, Xenopeltis. They are, along with boas and pythons, one of the most primitive groups of snake. Since they have traits from both genera, they belong to neither genus.

Both species of sunbeam snake are native to Asia. They live in China, Indonesia, and range into the Philippines. They are commonly found in rice paddies or open areas, but they spend a lot of their time underground as well (making them 'fossorial,' i.e. 'this thing lives in ditches').

So why the hell are they so darn SHINY? What does iridescence do for a snake that spends most of its time underground? Who knows. Just sit back and enjoy the shimmer.

Yes, this was the best YT vid I could find.

Naturally, I did some research on sunbeams after coming across them on Kingsnake. It turns out that they are fairly advanced snakes (as are rainbow boas, by the way), requiring 80-100% humidity, a lot of substrate and fairly high temperatures. Despite their brilliance, they stress easily, and should not be handled frequently. Just leave them alone and let them strike like lightning at feeder mice.
Posted by KuroKarasu at 6:54 PM