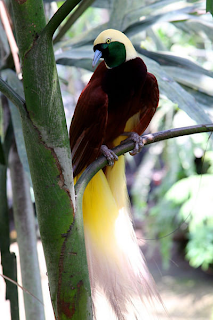 It's time for yet another example of sexual dimorphism in birds. As with many of these, the male gets all the love. The male Greater bird-of-paradise sports elaborate feathers that rival the tail plumes of the quetzal. It is native to New Guinea and Indonesia (which is its own reservoir of awesome, I swear).

The Greater bird-of-paradise (Paradisaea apoda) is so called because the first trade skins brought to Europe had their feet removed by the natives. This led European scientists to believe that the bird was a creature from paradise kept aloft by his elaborate display plumes. He supposedly never rested, only landing to Earth to die. (This is almost like an airborne version of an actual creature, the oarfish, but that is for another article.) 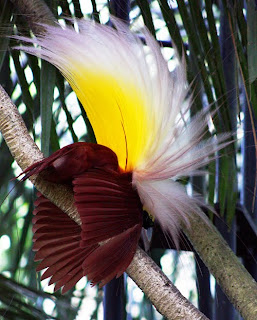 The bird-of-paradise's display feathers, instead of being based in the tail, are situated on the bird's flank - that is, beneath its wings. He also has wiry tail feathers that make his display more than just a bunch of yellow fluff.

There are many more interesting birds-of-paradise, but this one is one of the most eye-catching. It is also the species that gave the whole genus its name. One look at those feathers is enough reason to consider it unearthly; use stories and attributes like this for your own designs!

(I'll get bored of pointing out the sexual dimorphism possibilities in birds eventually.)
Posted by KuroKarasu at 1:00 PM