Let me tell you about a creature called the Jersey Devil. It is a cryptid with the head of a horse, leathery wings, and equine hooves. True to its name, the creature has its origin in Leeds Point, New Jersey. It has supposedly been haunting the area for 260 years.

A more complete description from here:

"It was about three feet and half high, with a head like a collie dog and
a face like a horse. It had a long neck, wings about two feet long, and
its back legs were like those of a crane, and it had horse's hooves.
It walked on its back legs and held up two short front legs with paws
on them. It didn't use the front legs at all while we were watching.
My wife and I were scared, I tell you, but I managed to open the
window and say, 'Shoo', and it turned around barked at me, and flew away."

Now, look at this creature: 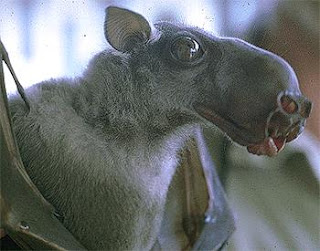 His name is Hypsignathus monstrosus, the hammer-headed fruit bat. When science is calling you a monster, you know you're weird. Only the males have the namesake heads, but damn if they do not look like the Jersey Devil's little brothers!

Hammer-heads are big enough bats to warrant a cryptid legend. A male hammer-head's wingspan can be up to 970 millimeters. That's almost a meter, which is a little more than a yard (3 feet) in U.S. terms. It is the largest bat in Africa.

For those of you who do not know sh*t about bats (or about bat sh*t, which can be used as fertilizer), the largest bats are always fruit-eaters. The hammer-head, however, has been known to prey on small animals. This is rare, but not unheard of.

That skull could've fooled me. A bite from that looks nasty!
Like the prairie chickens mentioned in a previous entry, hammer-headed bats are often cited as an example of lek mating. Males vocalize and flap their wings in order to attract a female. They are highly polygamous; only 6-8% of hammer-headed males may contribute to a hammer-head population. 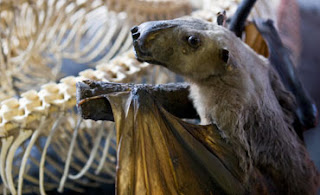 Pimp life.
Although it's unlikely that the Jersey Devil is really just an escaped fruit bat, the visual similarities are uncanny. Might there not have been an escaped fruit bat that someone thought was a demon baby (similar to escaped wild cats from private collections)? Granted, the creature would not have lived long; New Jersey is a very different environment from Africa. It's still an interesting idea.
Posted by KuroKarasu at 1:33 PM