Name one place that you do not want to get poked, kicked, slashed, or poked with a really hot French fry. Chances are, your first guess was your eye (or, if you have balls, your crotch). The eyes are usually the most vulnerable point on a creature; even dragon fanatics usually peg the eyes as the weakest spot on their supernatural uber-beasts. Hell, nature has several weapons designed to aim for the eyes, just because it sucks to get hit there.

Some people say, "fuck nature, we can take it." The things that humans will willingly put inside their eyes are, well, eye-popping. The most common trend catching eyes these days is corneal tattooing - a practice known since ancient times as a medical procedure, but more recently done just to freak people out.

Sticking ink in one's eye is not anything new. Eyeball tattoos are one of the oldest forms of tattoo art.  They go back as far as Ancient Rome. Galen of Pergamum, a Roman philosopher, used them to conceal white spots on the cornea. Various other doctors have performed their own tweaks on the procedure of medical eyeball art.

"Just hold still while I stick this ink-coated needle into your eye..."

Yes, eyeball tattooing has medical benefits. It can reduce the unsightly effects of eye diseases such as leucoma, cataracts, keratitis, various diseases of the iris and even the sight impairments caused by albinism. Besides simple cosmetic changes, the ink may help reduce glare in the eye and promote visual acuity. Hey, laser surgery was discovered by accident when a guy got glass in his eye; don't knock it 'til you've tried it.

As a body modification in healthy individuals, however, eyeball tattoos are a recent fad. The first two eyeball tattoos as most people know them were done by two Canadian prison inmates. They were not trained professionals in any sense of the word- just two inmates playing around with a hypodermic needle full of tattoo ink. Do not trust them if you would like a similar mod done.

Tattooing eyeballs a risky procedure, especially if it is not done by a trained professional. The eye has a lot of delicate little blood vessels that can burst if the needle is poked the wrong way. It's delicate territory. Eye tattoos are dangerous enough that the state of Oklahoma has outlawed them. How long do you want to bet that will last? 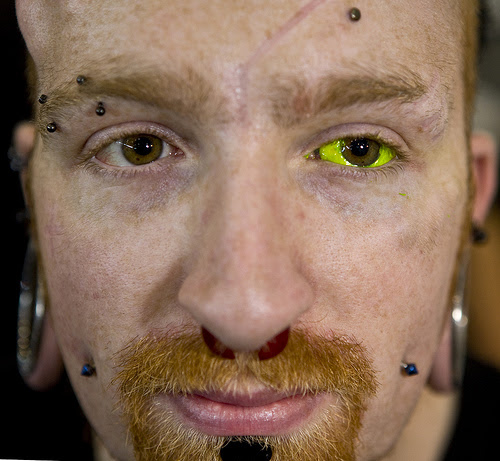 For those of us who are not hardcore enough to stick needles into our scleras, eye surgeons in the Netherlands have developed a way to insert platinum hearts and half-moons into patients' eyes. The procedure ranges anywhere from 500-1,000 euros. They claim that it is safe (in part because platinum is an inert metal as well as shiny), and, thus far, no side-effects have been found. British scientists disagree; they believe that, sooner or later, the eye is going to react to the foreign piece of metal. We're with them on this one. Murphy's Law: Anything that can go wrong, will go wrong.


Tomorrow: Tentacles and bay-gulls? It can only be from Japan.

Posted by KuroKarasu at 8:50 PM