Notice something a little bit...off...about that adorable little kitten?

OH MY GOODNESS, A CATGIRL STOLE ITS EARS! 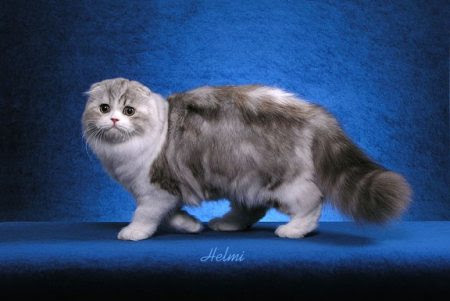 Actually, no kittens were harmed in making catgirls. The cat above is of a special 'breed' called a Scottish Fold. As the name implies, the ears on Scottish Fold kittens have the cartilage folded downward. This gives them a round-headed look that has been described as "owlish." 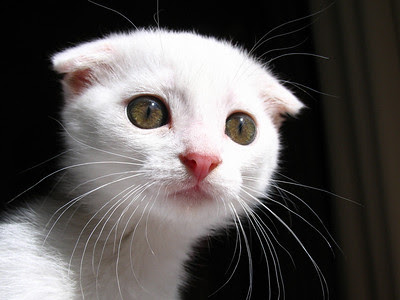 The Scottish Fold breed started with one cat, Suzie, who lived on a farm near Perthshire, Scotland. When she had kittens, two of them were born with folded ears like their mother. One of the kittens was taken in by a nearby cat-fancier, and the breed developed from there. Ear-folding is dominant, so the trait was easy to pass on to many varieties of cat. Thus the breed was born.

Before you ask: Yes, all Scottish Folds are directly related to Suzie. They are not necessarily inbred (responsible breeders encourage outcrossing), but have an amazing amount of issues from the one trait of folded ears. Even well-bred kittens develop osteochondrodysplasia - or, in English, bone problems. This can include anything from malformed bones at birth to severe arthritis in later years. These issues are so common with Scottish Folds that one vet discouraged breeding them entirely; they are also not recognized by European fanciers as a breed. 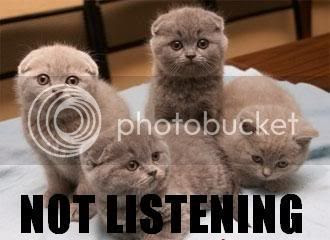 Of course, a breed needs more than one trait to be considered a breed. As in canids, cats with folded ears tend to have amicable personalities. Folds are very communicative cats; they also sleep on their backs and sit in "Buddha Position." Aww, they think they're people!


If folded ears are not your thing, the American Curl has the exact opposite mutation of the Scottish Fold: A Curl's ears curl upward for an expression of eternal surprise. Pet Curls can have the ears curling almost straight upward; show-quality curls demand a definite curl, but not so much that the ears touch the skull. Both longhair and shorthair Curls have very silky coats. If you like your cats a little bit odd but still with hair, the ears have it.


Tomorrow: We swear, this was the weirdest horse we could find...
Posted by KuroKarasu at 8:02 PM