Malaria is one of those diseases that one only hears about in third world, tropical countries (but used to be more widespread). Most people only know that it is spread by mosquitoes and that it really, really sucks to get because there is no real cure. This is the tropical disease that single-handedly renders nations poor and incapable of economic recovery. It's that bad.

Oh, and it's a critter. Not a virus, not a bacterium, a single-celled critter commonly called a protist. More accurately, any disease caused by a microscopic organism called a Plasmodium can be called "malaria." There are several Plasmodium species that can infect humans including P. falciparum, P. malariae, P. ovale, P. vivax, and P. knowlesi. P. falciparum is the one that most people are worried about, although any one of the above will at least ruin your year.

While most parasites try to make their presence as innocuous as possible, malaria does not even try. It can incubate for up to a year without any noticeable symptoms, but after that, its presence becomes known very quickly. This is not a friendly parasite; it makes a tapeworm look like a good neighbor.

The symptoms of malaria vary slightly from species to species. Common indicators are fever, chills, and headaches. If left untreated, the spleen may also swell (do you know where your spleen is?), and, eventually, the parasites can cross the blood-brain barrier, causing coma and death. Since some  parasites use the liver as part of their life cycle, thorough tests for malaria require both blood and liver examinations.

Malaria starts its life in the gut of an Anopheles mosquito. The mosquito bites an infected human, sucking immature plasmodia into her gut. They mature slightly into sporozoites and travel to her saliva. Then, she is ready to bite and start the cycle again. We realize that one mosquito may well look like the next to most of you, but please be on the lookout for this one: 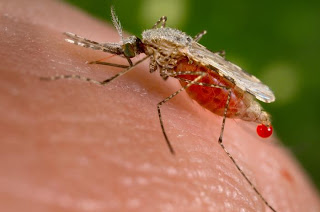 Once inside a human, the sporozoites (the wormy things from earlier) rupture, releasing countless merozoites. These swiftly infect red blood cells and reproduce asexually within them. P. falciparum goes for the liver before heading towards the blood; when the infected liver cells burst, the malaria then goes for the erythrocytes. In short, these are protozoans that reproduce like a virus.

Over time, there have been a number of "cures" for malaria. The first was quinine, a substance originally found in the cichona tree in the Peruvian Andes. Several other drugs, including fakes common in Asia, have since been developed, but Plasmodium protists gain drug resistance just like bacteria and viruses do. They evolved with us and will continue to evolve with us.

Tomorrow: It looks like a kingsnake, but it swims!
Posted by KuroKarasu at 12:25 PM