Of all the mammals in the world, the horse gets the least amount of love on this blog. It's not that I don't like horses; like all females, I went through a horse/pony phase, got a lot of horse books, and even took riding lessons.

This blog has nothing against horses. They just aren't very weird.

Sure, they're beautiful, graceful, powerful, and whatever else have you, but horses are only really weird if you have never seen a domesticated horse before in your life. A real horse person may talk on and on about the differences between an Arabian and a Palomino, but that's still not particularly weird. Cool, but not strange unless you want to get into subtleties. 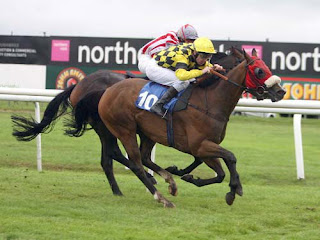 Racehorses have a lot of inbreeding going on, though.

To make horses weird, one has to go way back. The horse was probably first domesticated in Mongolia. Let's try there.

The Mongolians love their horses. The horse population in Mongolia is around three million - more than the entire human population. The national drink, airag, is made of mare's milk. Each family member has his or her own horse. Young men are traditionally given a horse upon their third birthday. Even the nomadic tribes have horses. An old Mongolian proverb says that "a Mongol without a horse is like a bird without wings." Horse lovers, start packing; Mongolia is horse country.

The Mongolian breed of horse is a right bitch to find pictures of, if only because Mongolia also has wild horses. The two are hard to tell apart; not very much has changed in Mongolia since the horse became domesticated. This similarity plus genetic diversity makes them a strong candidate for the first horse breed ever.

Mongolian horses are sturdy. Very few of them need to wear shoes. Even so, they tread cautiously. Once they get used to having a rider, they are calm horses and can run up to 35km/h. Racing horses is the second most popular sport in Mongolia; given the creature's popularity, it is very easy to see why.

The horse was the primary weapon of the Mongolian Empire. Fighters with horses had a substantial advantage over people without: horsemen were faster, could trample opposition, and could shoot arrows on horseback. It was thanks to the horse that Genghis Khan was able to take over much of the known world. As the great Khan himself said, "It is easy to conquer the world from the back of a horse."