"They Actually Eat That:" Jellied Eels.

Oh, gods. How did lutefisk get two entries?

Kidding, kidding. That is a dish of jellied eels, not lutefisk. Blame the once-poor population of Britain, France, Italy, Germany...actually, pretty much all of Europe has some version of the horror that involves eels, vinegar, and occasionally gelatin. 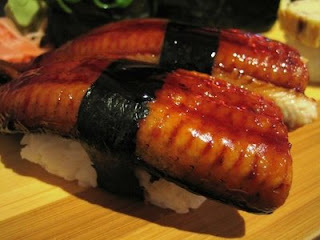 A lot of places eat eel. It tastes like chicken mixed with fish by itself and can be amazing with the right sauce. Eels are common fish in sushi, but for once, this is not about Japan. They are the lesser of two evils this time around. Hell, shit is still happening there; cut them some slack.

Although now critically endangered, eels were once so abundant in Britain that they could be caught with ease. The Thames was repeatedly swept for eels with giant nets. The meat was then sold to the poor for cheap. While it sucks that Britain is eating endangered eels in its old-timey cuisine, the grossness is not so much that the British eat eels as it is how they eat eels.

After being put in a vinegar broth, the eels' natural sliminess causes the base to gel up into something called aspic. That should ring a bell; it also came up in the SPAM entry. Anything so heavily preserved that it is on par with SPAM cannot be good. That goes double for anything with aspic.

Aspic is the word for ANY jelly made from a meat base. It is used as a preservation method and is very, very hard to make. Eels are naturally slimy creatures; they have no scales and, like hagfish, rely on a mucous coating for defense. They help make their own jelly. This does not make aspic any less disgusting. It just stacks slime on top of slime.

It gets worse. Jellied eels are often paired with pie and mash, which is nowhere near as delicious as it sounds. Pie and mash is, in a nutshell, pie crust, mashed potatoes, and sauce that, umm, looks like something Slimer sneezed up. Classy, Britain.

So, why do people eat jellied eels and snotcakes? For the sake of eating them, mostly. They are traditional British foods and, as such, have their own following. Eating eel is an acquired taste; how they acquired it in this day and age is anybody's guess.


Next Week: Frogs and snails and puppy dog tails...the French eat all except the last one.
Posted by KuroKarasu at 7:59 PM

Email ThisBlogThis!Share to TwitterShare to FacebookShare to Pinterest
Labels: europe, fish, They Actually Eat That