"They Actually Eat That:" Squid.

Cephalopods, the family including octopuses, squid, and cuttlefish, are among the sea's weirdest residents. Despite not having spinal cords, they are strange, wonderful creatures. Octopuses can morph into any shape, walk on land, and predict soccer match outcomes with surprising accuracy. Cuttlefish are like living mood rings. Squid, well...

"Calamari" is the general term for squid as food. It is derived from the Italian "calamaro", which just means "squid." Greek and several other languages use similar words. Calamari as most restaurants in the U.S. serve it is deep-fried and served with dips; think of them as fleshy onion rings. Other garnishes, sauces, and cheeses may be used depending on where you go. One Spanish calamari recipe even uses the squid's own ink as part of the sauce! 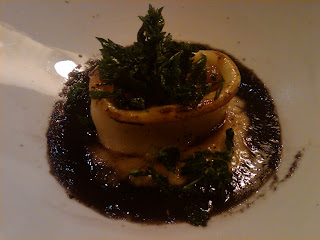 Japan, China, and other places in the East not only eat squid, but have picked up the idea and ran with it. Sushi with squid on or in it is called "ika" (again, just another word for "squid"). Squid can also be served alive (ikuzukuri), or at least very, very fresh. Korea and Japan have a particular taste for the only type of squid that can see color - and it glows in the dark!

Eating tiny, glowing squid is just the tip of the iceberg. Japan puts squid on their pizza and squid ink in their soft serve ice cream. Anyone who has seen the movie Host knows that dried squid are sold as snack food in Korea, China, Japan and Taiwan. The West has pork rinds, the East has squid hung out to dry.

No wonder Cthulhu's always in such a bad mood. We're eating his babies.

Next week: Breast milk. We swear that Qwaser has nothing to do with it.
Posted by KuroKarasu at 11:07 PM