Now for a million-dollar question (without any money involved): Do you use Mozilla Firefox to surf the 'net?

If so, did you know that Firefox is not based off of a fox at all? Most of us probably know it better as the red panda (Ailurus fulgens). It does indeed look more like a fox than a panda, but whatever you prefer to call it, it is adorable. Cool of Firefox to get us live red panda footage!

The red panda is native to China (like the giant panda) as well as some parts of the Himalayas. It is a small, omnivorous mammal about as large as a house cat. It spends most of the daylight hours sleeping, just like a cat. It cleans itself and climbs just like a cat. Even its generic name, "Ailurus," is a nod to how catlike it is...even though it is closer to raccoons and weasels. It is suspected to be a species isolate; its closest relatives died off 3-4 million years ago. Cutest fossil ever. 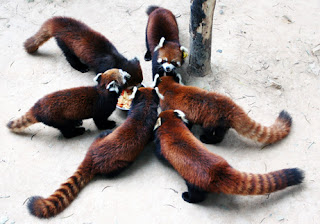 The red panda's diet consists largely of bamboo, even if it does eat insects and small mammals as well. It has evolved a "false thumb" like the giant panda to help it hold its food. The similarities end there; it eats bamboo like a panda, but otherwise, red pandas are completely different creatures. Just as cute, though.

Red pandas have a few characteristics all their own. They waddle due to their short front legs, but that same build allows them to climb down trees headfirst. They communicate via a call known as twittering. Yes, you heard that right: The red panda had Twitter long before humans made up the concept. Holy carp, they own the internet!

Now, we know what you're thinking: "Can I have one as a pet? PLEEEEASE, mommy?"

Haha. No. Red pandas are vulnerable, sporting less than 10,000 individuals in the wild. If you want one, become an endangered animal breeder. They would make pretty bad pets anyways, even though they thrive in zoos. For the record, raccoons do not make good pets either. We've looked.


Tomorrow: So what CAN you have as a pet? How about a fox as tame as a dog! Also, breast milk.
Posted by KuroKarasu at 8:01 PM