Nature is full of awesome mimicry. We've already covered the pseudo-poisonous coloration of the king snake family. Viceroy butterflies are a good example of a non-toxic creature mimicking one with a bad taste. Mimicking a toxic/bad tasting species while being harmless yourself is called Batesian mimicry and is found throughout nature.

This octopus does that and then some.

Discovered in 1998, the mimic octopus (Thaumoctopus mimicus) lives exclusively in the prey-rich areas of Indonesia and Sulawesi. It is considered the single most intelligent invertebrate in existence. Is it a manifestation of Cthulhu's almighty tentacles? Maybe. 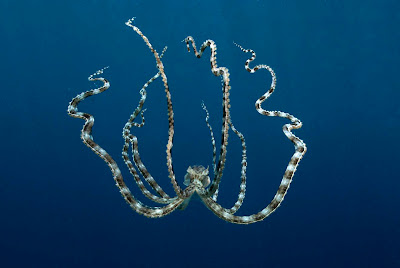 In his city at R'lyeh, dread Cthulhu waits dreaming. Do not disturb.

All octopuses are carnivores, but they have predators, too. They are the masters of camouflage. Octopuses do not just change the colors of their skin, they change the texture as well. Push comes to shove, a lot of them have ink and can regenerate tentacles if one gets torn off. Octopuses have plenty of tricks up their sleeves simply by virtue of being Cthulhu's minions octopuses.

The mimic octopus makes other octopuses look like amateurs. It has excellent camouflage powers, copying other species of sea life in every way except genetics.


A number of factors affect what form the mimic octopus chooses to take. Depending on where it is located in the water, it can copy the shape and movements of a flounder (which is not like the friendly fish from The Little Mermaid at all) or the venomous lionfish with its flashy fins spread wide. Granted, the lionfish is not its most impressive imitation; for something without a spinal cord, it still does a damn good job.

If attacked, the mimic octopus may even imitate the aggressor's natural predator.  For example, a lot of things fear black and white sea snakes. They have good reason to; sea kraits are the third most venomous snake in the world and have menacing bands to look the part.  In a flash, the octopus can look like one of the most venomous creatures in the world. This is not just a color change; as you can see in the video, it makes its tentacles mimic the behavior of a snake as well.

These examples are just the tip of the iceberg; the mimic octopus has been known to copy up to 15 different species with surprising accuracy. Somewhere, viceroys are jealous. No wonder it wasn't acknowledged by science until recently - it does a fine job of keeping its true identity under wraps.

Tomorrow: Speaking of, flounders are pretty weird fish in and of themselves!