Forgive us for changing the title for plant entries from a rather awkward modification of "Creature Feature" to something more fitting. Plants really are weird enough to warrant their own header, even when done sporadically. 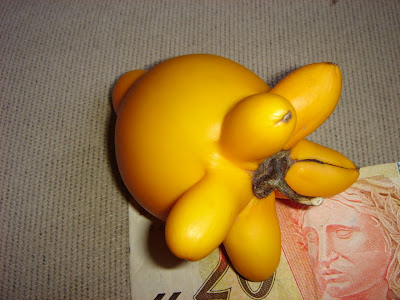 Like this one. Plants are full of wonderful "what the hell?" fodder that surfaces by accident in one's daily searching. What the hell is that? Why does it look like a cow's udder? What does it taste like?

Innocent this fruit is not, and hooo boy does it show. The scientific name, Solanum mammosum, suggests tits; the fruit itself resembles a human breast on one end and a cow's udder on the other.  Common names for it include nipple fruit, tittyfruit, cow's udder, or "Apple of Sodom." The Japanese call it "fox face" (wow, REALLY?) and the Chinese simply refer to it as a five-fingered eggplant. Talk about seeing the same fruit from different perspectives.

The, umm...tittyfruit is native to South America, but has been cultivated as an ornamental plant almost everywhere. The Chinese are particularly fond of it due to its bright gold color. It can also be used as a treatment for certain ailments or for washing clothing. Nobody mentions using it for...pleasure. Probably a good thing.

No matter how tempting it is, do not eat this fruit. Unlike eggplants, tomatoes, and other 'innocent' Solanaceae, tittyfruit is toxic. The plant will kill you for molesting its naughty bits.

(Why, yes, my brain is, in fact, baked thanks to recent tests and a Sappho paper.)
Posted by KuroKarasu at 7:55 PM