Speaking of Cleopatra, legend and Shakespeare have it that she committed suicide in an interesting fashion: After concealing a poisonous snake in a basket of figs, she induced it to bite her on the breast (a motion that paralleled a witch's familiar suckling at its mistress's teat). She died a quick, painless death thanks to this snake's bite. The Romans thought this was awesome; so did Shakespeare, who added even more gothic details.

Herpetologists and classicists alike have been trying to identify exactly what snake bit Cleopatra on the rack. "Asp" was a generic term for any venomous snake way back when, making this a tricky task. It could have been any poisonous snake, and hooooo boy, does Egypt have a lot of those!

Thus far, the best candidate for this mysterious snake is the Egyptian cobra (Naja haje). This same snake or the Egyptian spitting cobra may have been the basis for Udjat, one of the most primal goddesses in Egyptian lore. The cobra can be seen on the headdresses of many deities and pharaohs; even though the serpent had a negative representation in Apophis, Udjat's cobra was something special.

Cobras get all the love.

The Egyptian cobra is one of the most intimidating snakes in all of Egypt. Cerastes has nothing on the large (6-7 inch wide) hood of the Egyptian cobra. This elapid can grow up to 8 feet long, but will usually flee before flaring its hood. It eats rodents and, like foxes, has been known to sneak into chicken coops. Every Egyptian healer was intimately familiar with this snake and, as with horned vipers, had a spell or two on hand at all times in case of a bite.

There has been a ton of debate over what, exactly, caused Cleopatra's death. Although several people love the idea of Cleopatra slipping away painlessly at the bite of one of her own deities, there are several things wrong with that theory. Egyptian cobras are huge, thus making them difficult to conceal. Unfortunately, the "painless death" bite is fictional as well. 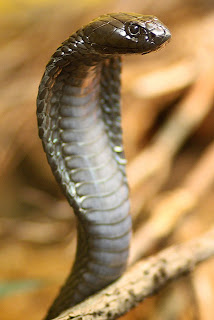 Egyptian cobra bites are not as wonderfully painless as history would have us believe. Along with general malaise, a bad case of diarrhea, and severe swelling at the bite site, the Egyptian cobra's neurotoxin can cause necrosis (remember the brown recluse?) and convulsions. It's a painful way to go out. If Cleo went out by snakebite, it probably was not a nip from an Egyptian cobra - at least, not by itself.

The current theory is that Cleopatra used opium and hemlock in a drug cocktail to induce her painless death, but she may have included cobra venom for a little extra bite. She was very fond of playing with poisons, and, according to Plutarch, would test them on her prisoners. Until we either get a time machine or find a way to molecularly analyze Cleo's corpse for toxins, the world will never solve this mystery.