Life has away of situating itself where we least expect it. There are bacteria in literally every environment.  Tiger mosquitoes came to us in tire shipments. Crested geckos went extinct for a few years, then suddenly reappeared. Frogs are surprisingly abundant in the Himalayas. The list goes on. 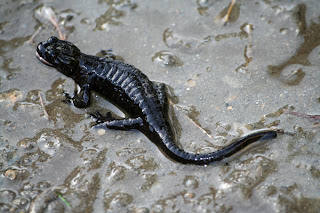 So why should we be surprised that there is a unique sort of salamander in the Alps? The alpine salamander (Salamandra atra) also happens to be completely black.  It is found at altitudes above 700 meters - pretty darn high up - in the Central, Eastern, and Dinaric Alps. For those of you bad with geography, that's Switzerland, Austria, Italy, France, and more obscure places like Bosnia and Croatia.

Let's put this in perspective. Salamanders, and amphibians in general, are usually associated with hotter climates. The Alps? The Alps are where the Sound of Music took place. There is a lot of snow in mountains in general. Personal experience has also taught me that altitude alone makes things cold. Discovering a neat salamander in such a place is, well, something to write about.

These salamanders are among the few wholly terrestrial amphibians. As if in rebellion against the name "amphibian," alpine salamanders spend their whole lives on land. Most salamanders mate, lay eggs, and spend part of their lives in the water. These do not, leading to a phrase you will never see anywhere else: pregnant salamander. Yep, these guys have live babies.

Baby alpine salamanders are born much like baby sharks or boas: they have an egg at one point, but it hatches inside the mother. The eggs eventually melt into a nutrient (vitelline) mass that all the embryos share. Like all babies, the salamanders also have gills in the 'womb' as they develop; in the case of these salamanders, however, the gills link them to the mother's blood supply. They've evolved a womb without really evolving a womb. Neat.

The freaky part: Alpine salamanders have a long gestation period, even by mammalian standards. It takes them 2-3 years to give birth, depending on subspecies. That makes the longest gestation period of any known animal. This is probably the reason that some subspecies of alpine salamander are critically endangered - that, and being amphibians. Not-endangered varieties aside, these salamanders are decently abundant and simply very good at not being seen.
Posted by KuroKarasu at 9:22 PM