Although some people might recoil at the mere thought of snakes, rainbows are one of the more positive things that they tend to be associated with. China and Australia both make mention of a "rainbow serpent" of some sort - in the case of China, it even has two heads! Considering that some snakes are iridescent, this should come as no surprise. It's still awesome when science and lore agree on something,  so here goes. 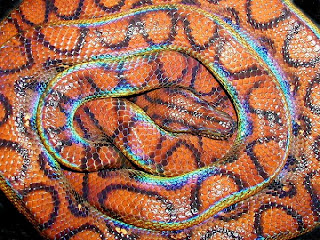 The rainbow boa (Epicrates cenchria) is a real snake- and what a piece of eye candy! They are native to Central and South America. Like all boas, they have live babies.Rainbow boas eat anything small and warm-blooded that they can sink their teeth into.

The rainbow boa is named for, you guessed it, its multicolored luster. Rainbow boas are highly iridescent, unlike some snakes that only yield a flash of color once in a while. A flash of cyan looks quite striking against the red and black patterning, too. Your mileage may vary on whether this or the sunbeam snake has more shine. Some people have hailed the rainbow boa as the most beautiful snake in the world, but it has serious competition for that title.

This shininess has made rainbow boas highly desirable snakes in the pet trade. A lot of specimens have been taken from the wild, decreasing the amount of rodent-eaters in the ecosystem.  Luckily, the upside of this is the abundance of rainbow boas bred in captivity.  I would still ask where any given rainbow boa came from; if the answer is "from Brazil," don't buy it! Boas are good for the ecology down there. There's no need to take them from the wild anymore.

Rainbow boas are not a beginner's snake. Beautiful though they may be, they do get around 6-7 feet in length. All of them require extra humidity unless you happen to live in a rainforest already. .I wouldn't call them a good 'first' snake; the guys at my local reptile place were honest when they warned me that Brazilian rainbow boas were fragile. Those that keep them well, however, will be rewarded with a real light show in their terrarium. These are snakes for looking at more than handling.
Posted by KuroKarasu at 11:33 PM