Before you immediately assume that the title above is some sort of Japanese liquor, consider the following: 1. you know this blog only covers "LET'S BREW!" topics on Wednesdays, and 2. Japan is a chain of islands with a bunch of unique wildlife by default. Did you really think that their weird mythology just happened? Nooo, their wildlife inspired a lot of it, just to make things extra-disturbing!

The musasabi (Petaurista leucogenys) is known as the "Japanese giant flying squirrel" in English. Specifically, it lives in Honshu, Kyushu, and Shikoku in the Japanese archipelago, as well as Guangzhou in China. It eats fruits and nuts. They can be found fairly close to civilization, with Mt, Takao being only an hour away from Tokyo.

Once again, the question is "how giant is giant?" This video actually gives you a pretty good idea. For those of you who prefer stats, it can weigh up to 1500 grams and can be up to 90cm long including the tail. Aside from being a darn big squirrel, the musasabi can also glide up to 160 meters. It's almost as big as a cat, and it can all but fly. Japan has fine nightmare fuel indeed.

Although not as well-loved as the momonga, the musasabi does have some representation in Japanese culture. It can be found at Japanese exotic pet conventions, although, aside from having an easy diet, I cannot see these squirrels being good captives. There is also a popular Italian restaurant on the Keio line called "Musasabi." The mususabi, like the momonga, also has the rather funny honor of being a Kaiyodo sculpture and featured on a children's trading card: 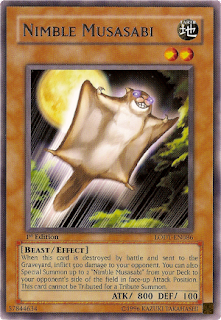 Frankly, we're surprised that the electric momonga in Gen V doesn't evolve into this monster-squirrel. That would be kinda cool. FUND IT.
Posted by KuroKarasu at 11:55 PM