Art is meant to throw the status quo into question. It's meant to make you think. At the same time, you're supposed to 'get it,' which cannot be said of much modern art. Good art is not only aesthetically-pleasing, but comprehensible. That applies to bio-art as well.

Thus SymbioticA's Semi-Living Worry Dolls. They are based off of Guatemalan talismans that effectively absorb the worries of the owner. The idea is that they "worry in the person's place." These particular worry dolls just so happen to be made of bone and muscle tissue, courtesy of Australian lab SymbioticA.

If the name SymbioticA sounds familiar, it's because we've already covered at least one of their projects. They also did Pig Wings, which played with gallery-goers' expectations, and Disembodied Cuisine, which was part of the no doubt PETA-desired "victimless utopia." Both of these have features on this blog.  I may have to make a tag for this Australian bio-art team.

Now we have the symbolism of the worry doll to factor into science. Take three guesses of exactly what worries these dolls are meant to absorb. Go ahead. I'll wait. 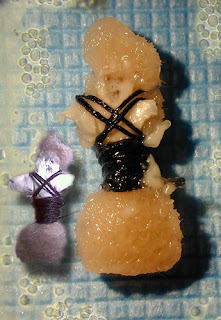 If you said "stem cell research," "cloning," or anything related to the fears about genetic engineering, you get a gold star. When it comes to manipulating life, progress is inevitable. Science itself takes no responsibility for how the research is used, so it's up to us to worry. What should we do with the ability to manipulate life? According to Zurr, one of the workers at SymbioticA, we have to become "post-humanist. Species is not important."

The team at SymbioticA took things to an even further level: If growing artificial cells was not enough, they were also grown in an artificial womb. In-vitro fertilization is already alive and well; it won't be long until 'natural' sex becomes obsolete, or so people fear. Personally, I don't think sex is going to die any time soon. If it worries you, however, we have a doll for that.
Posted by KuroKarasu at 1:19 PM