Look at that title. Really, look at that title and use your imagination. There are a million ways to get creative from the title alone. Did a snake do it with an octopus, and is this entry devoted to their unholy lovechild? No. Is it the ultimate in tentacle pronz? No. It's just a water snake that just so happens to have tentacles on its face. 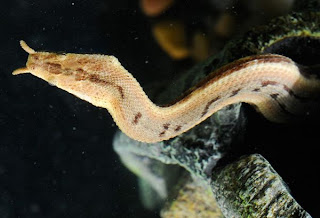 The tentacled snake (Erpeton tentaculatum) is a rear-fanged water snake native to Southeast Asia. It is wholly piscivorous. Its entire life is spent in muddy lakes and rice paddies. Some even venture into seawater.  Unlike some snakes, which come in a rainbow, tentacled snakes are only striped or blotched. Like many water snakes, they have live babies.

The tentacled snake was not science's most creative naming venture. The most prominent thing about this water snake is that, yes, it has tentacles. These tentacles detect fish better than the snake's tongue ever would. They use a blend of sight and touch - yes, these tentacles loop back to the vision center of the snake's brain. Imagine sticking your tongue out periodically underwater; that is why they evolved tentacles.

The evolution of tentacles is far from this snake's most impressive feat; how it uses them is just as cool as their existence:

The way the tentacled snake manages to catch the fish is a whole different matter. In the video above, you can see the snake bending its body right after it detects the fish. This motion is enough to trigger the C-start (escape) reflex of the fish, sending it straight into the jaws of death. This snake is predicting what its prey will do next. That's pretty impressive.


Most of us think of the reptile brain as primitive. The revelation that snakes can meter out their venom and the behavior of the tentacled snake above should be enough to make one wonder how intelligent snakes really are. This one just so happens to have tentacles, making it either cooler or creepier. Your mileage may vary, of course.
Posted by KuroKarasu at 10:57 PM