When most people think of salmon, they think of one of two things: 1. pink fish meat, 2. the crayon named after pink fish meat, 3. a generic fish that gets caught by grizzlies on nature programs. If only the life of the salmon was emphasized instead; they're really more fascinating than their rather mundane status as a food fish lets on.

Pacific salmon are salmonids in the genus Oncorhynchus. They breed in the Pacific Ocean, ut spawn in freshwater- exactly how awesome this is will be detailed later. There are a lot of different types of Pacific Salmon out there (7-odd species). They have a fair amount in common, so I hope nobody minds if I use a video of sockeye salmon at one point and Coho at another.

The rule of thumb in fishing is that salmon migrate and trout stay in one place. While not 100% true, salmon are known for an extensive migratory route, called a salmon run. They spawn in freshwater, then the adults die. The young (fry) then migrate upriver in an epic journey to the ocean, where they meet up with the other adult salmon lucky enough to make the journey. Then the cycle starts again, with adult salmon swimming downriver, using scent to find their way back to the place where they were born.That's right: These fish change from being saltwater to freshwater and back again, and swim back to the exact location where they were born using scent trails alone. Consider your mind blown.

But wait. It gets better. 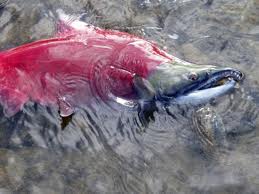 During this migration, male salmon undergo a mutation unlike that of any other fish. They develop menacing jaws, which have the specific term "kype." These all look like they swam straight out of the icy bowels of Cocytus and wish to eat your face off. Being bright red-pink does not keep those jaws from being terrifying. The hunch is also a bit disturbing. Aside from sex change, this is the most drastic change in any male fish over its lifetime.

Hatchery impact on salmon mostly comes into play in the ocean. Adult fish are harvested from the ocean, with females being gutted for their eggs. Multiple males are then forced to, umm, fertilize the eggs to ensure genetic diversity. The young are raised at a building until they're mature enough to swim in the streams. The impact has been severe enough to endanger wild salmon populations; hatcheries are both responsible for the decline and capable of preserving some of the more at-risk species. Pollution doesn't help, but it is really hard to legislate fishing. Hatcheries may soon be the only source of salmon, so be careful of what you're eating.

Salmon is one of the healthiest fish to consume, being a good source of protein and Omega-3 fatty acids. Remember that salmon lead interesting lives, and that mature male salmon pack a terrifying face that will haunt your nightmares. You're welcome.
Posted by KuroKarasu at 9:34 PM