Tomorrow is the North American Reptile Breeders Conference. That mans there will be a huge post with pics on Saturday. Sunday will have a closing article discussing the ethics of exotics. In the meantime, "Ethics Week" fodder keeps throwing itself at me.

So, before that mess, one thing:  I don't like PETA, but I really have to admit that they have outdone themselves on this one.  I mean, someone at PETA actually played the Pokemon Black/White game; there's a spoiler in there in case you haven't played Pokemon Black/White, yet. Also, they utilized the almighty Mudkip overlord, for which I am eternally grateful.

(Hint: Use the pink attacks. They work miracles.)

Normally, I would not want anything to do with PETA. Yes, animal testing and abuse are both horrible. There are, however, some groups so highly against humans being within a mile radius of any sort of domestic animal that they wish humans to stop touching animals entirely. Fact is, the human species has benefited greatly from utilizing animals in testing to the point where this photo is quite true: 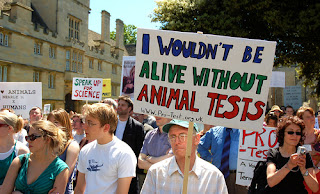 Basically, if you have ever had a medical emergency, you probably owe a lab rat (a literal one) your life. Yes, there are humans taking some 'lab rat' jobs, nowadays; the main reason for using mice and rats is that it is a looooot faster to get results. With medicine in particular, it's a good idea to test on something inhuman first; skewing the dosage just a tiny bit can result in killing someone. When you really get down to it? Yes, I can go on record saying that a human life is just a tiny bit more valuable than the life of a little white mouse, especially when people expect to be paid for drug testing.

This is not to say that I condone any and all cruelty. Factory farms are still crossing the line; circuses are still brutal to their animals. There is a line there that PETA is notorious for crossing. (The HSUS is another organization like this.) At least they know when they are being made fun of in a multi-million dollar franchise...and respond in good spirits.
Posted by KuroKarasu at 11:56 PM