Looking at the title, one or both of two things are probably running through your head: one, this is totally typical of me, and two, why am I picking on such a well-known animal? The answer might surprise you: In the wake of yesterday's little video on morality, is it possible for evolution to occur via religion?

As a rule of thumb, humans do not kill animals that they like. Chances are, if you eat meat and live in the U.S., you do not personally know the cow that your hamburger came from, and you would not eat your own cat or dog unless it came down to survival. Culture decides which animals go and which ones stay. In stark contrast to America's picky eating habits, we have China, where the best way to absorb an animal's qualities is to eat it. If something is considered sacred to a culture, it will usually be left alone. 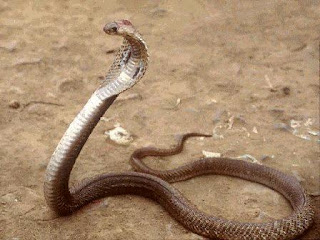 Everybody reading this probably knows something about the Indian cobra, AKA Spectacled Cobra (Naja naja). The first name comes from being found in India; the second, from the marks on its hood. It eats rodents, birds, frogs, and, yes, other snakes.  This is often the cobra used in snake charming, so you've probably at least seen a bad caricature of one.

India is practically known for snake worship. Buddha is sometimes seen shielded by a multi-headed cobra;  numerous deities show the cobra like a protective talisman; snake charming happened in India and almost nowhere else for a reason. India is the only place with an official 'Big 4' of poisonous snakes (although Australia probably has something similar). They have whole festivals in hopes of not getting bitten. They also have an interesting story to explain how the venomous Indian cobra got such interesting markings on its hood.

Legend has it that Krishna, one of the biggest, most powerful gods in the Hindu pantheon, was asked by some cowherds to detoxify a river. All living things that drank from that river died, so yes, it was a pretty big deal. The source of the poisoning was the naga (big cobra) Kaliya, who, in some versions, was hiding from Garuda, a half-bird half-man that was the mortal enemy of nagas. Krishna still had to get the snake out of the river, and gave the cobra a stomping. Those footprints remain on the snake's flattened hood to this day. Another origin story reflects the pattern's similarity to the 'om' mudra, but that's far less exciting than a snake getting trampled.

The Indian cobra already has some respect for being in India's Big 4; that and the cobra's visually-impressive display were enough to get it deified. That has, intentionally or not, been taken a step further by selecting which snakes should live by the markings on their hoods. Although Indian culture is generally wary of killing any cobra, their neighbors in Pakistan are not so kind, and actually discriminate against cobras with hood marks and cobras without.

Pakistani culture (i.e. a culture in an area very close to India- no, I am not accusing the two of being the same) treats marked and unmarked cobras differently. As per Secrets of the Snake Charmer, black Indian cobras are called "Caro," "fierce," while the ones with hood markings are called "Padam," peaceful. Supposedly, a fierce cobra lives for 125 years before becoming 'peaceful.' Pure black cobras are usually killed; the ones with the footprints of Krishna on their hoods are spared. It is thus probable, although not really provable, that something similar could have happened in India.

If this is selective breeding, it is selective breeding of a most unusual sort. It's not like the snakes are being bred in a facility to have the most elaborate hood markings possible (although no doubt some have tried). It's more like snakes with the marks have a carte blanche to live fuller, happier lives than their unstamped counterparts.

Could India be unintentionally breeding cobras for hood markings? It seems likely. Now, what about other hood markings? You'd think that looking like a bull's-eye would be a bad thing.

Posted by KuroKarasu at 9:32 PM