Is there anything happier than a dolphin? Really, name one creature that lights up a room more than a giggling, clicking, smiling dolphin. As Cracked put it, "no animal is more closely associated with Day-Glo rainbows."

Then we get into river dolphins. River dolphins are Flipper turned nightmarish. I won't go into a more thorough description than that. Just... 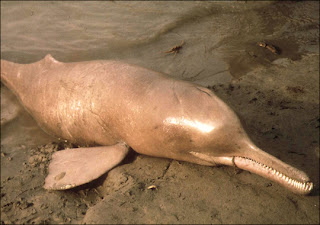 ...that. Just that. You would not want that to save you while drowning. (Well, maybe Bogleech would.) This dolphin warps our perception of dolphin so well it's awesome.

"That," in this case, is an Indus River dolphin (Platanista minor). The Indus and Ganges River dolphins are technically the same species, although how scientists decided this is anybody's guess (how would you breed these two?). It eats shrimp, carp, and catfish, among any other small seafood unfortunate enough to get caught in those teeth. It is native to the Indus River in Pakistan, joining leopard geckos and sand cats on the "cool animals that can be found in war-torn areas" list.

When it comes to river dolphins, all things that make dolphins cute go downstream. That goofy smile is replaced with an elongated grin full of teeth that show even when the jaw is closed. There are no sympathetic eyes to look into.  Instead of being sleek and grey, this dolphin looks like a mottled pink dolphin corpse sent to float down the Ganges.

All dolphins echolocate, but the Indus River dolphin is entirely dependent on sonar. Its eyes are almost nonexistent; the most they can do is detect light and shadow, if that. It doesn't even have a lens in those rudimentary eyes. It is one of the rare mammals that is completely blind. Yeah, we're pretty sure this has to have some mythological relative - maybe the makara. A legless, scaleless makara.