I am hard-pressed to find something terrifying that fits here and not in the theme week, "Proof That There Is No God." Yes, next week covers things so terrifying that we cannot believe that a merciful god exists anymore.

So here's a frog that gets you plastered. Enjoy! 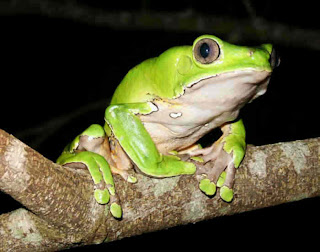 The giant leaf frog (Phyllomedusa bicolor), or just Sapo, is a toad native to the Amazon rainforest. It is nocturnal, meaning that frog hunts must be done at night or in the early morning. The frog sings only after it rains. Presumably, it eats some of the many insects that fly rampant throughout the Amazon.

The five-dollar question: How giant is giant?  I'll put it this way instead of giving you numbers: It does not fit comfortably in a human hand. It was called a "beautiful, giant thing" by Vice Magazine.  Some people have also felt psychoactive effects just by touching it, so not only is it huge, it gets you high as a kite.

Before you ask: No, these are not toads you lick. The Sapo is a toad that the Mayoruna and Matses natives tie up with grass, then torment until the venom forms a gelantinous teal coating on the toad's skin. The venom is then put on sticks that are burned into a shaman's skin.

And then they get high on the frog venom. The frog affects everybody differently. It can lead to sedation, stimulation, hallucinations, anorexia, and apparently spiritual experiences. It reacts to the same receptors opium does, but the burn probably deters people from using it as often as opium. It almost makes you wonder "who tried this first and how long did he live?" Seriously, who thought this was a good idea? 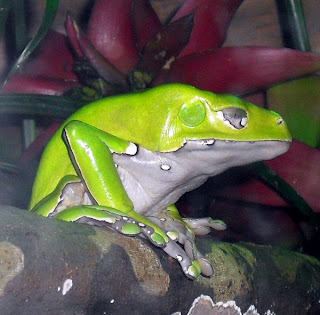 As one might have guessed, the Sapo is the target of considerable research. Aside from being a great drug, the waxy venom might be able to cure cancer and AIDS. There have been a few attempts to patent Sapo venom compounds, but no headway has been made in the research department. Hmm...I wonder why? Could they have achieved spiritual enlightenment and gone "Screw patents?"
Posted by KuroKarasu at 11:06 PM