Ever wonder where some laws come from? There are whole webpages devoted to cataloging unique laws that make no sense in other countries.

There are also some crazy laws that don't make it past the House and Senate. Thank goodness HR669 was one of them. HR669 would, in short, have made it illegal to keep any "exotic" animal - even things as small and cute as parakeets and chinchillas. When you think about where the law came from, it makes a modicum of sense...but that doesn't mean it needs to apply to the rest of the world.

This law originated from Guam. In case that means nothing to you, Guam has a snake problem. A big, brown snake problem that has killed off 90% of Guam's native fauna. While someone from Guam has perfect reason to be afraid of snakes in particular, their brown tree snake situation is insane. Let me show you.

This is a brown tree snake (Boiga irregularis). It's a slender colubrid (i.e. not a boa, python, elapid, or true viper) that can get around ten feet long in extreme cases. It actually looks really cool for something with such a mundane name, and has very mild venom. The brown tree snake is endemic to northern Australia, Papua New Guinea, and that general area.  It has also been naturalized on Guam...and this introduction is consequently proof that there is no God.

The snakes were not consciously brought to Guam. They hitchhiked in some wood on a military boat sometime after WWII (some places say 1948). From there, one gravid female hit the jackpot: her babies now had a supply of food that rarely happens in nature. How bad was it for the ecology on Guam? Let me express it in numbers.

There used to be 18 species of birds on Guam. Fifteen of those 18 species are extinct. All lizards save the (also invasive) house gecko have also been devoured. This was an island with almost no natural predators, let alone any defenses against venomous, Australian snakes.

All species of endemic mammals on Guam are now functionally extinct if they are not outright gone. There were only three mammals endemic to Guam, and they were all bats. To a snake's mind, a bat is a cross between a bird and a mouse. Those three bats were definitely on the menu. 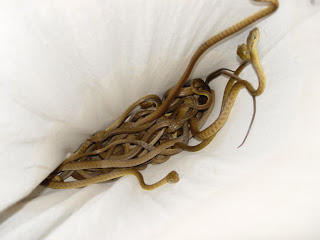 Oh, and forget Burmese pythons being man-eating monsters. Brown tree snakes have absolutely no fear of humans. The snakes cause power outages, of all things. Although there is absolutely no way that a brown tree snake could fit its mouth around a human infant, some have tried. This was not an accidental feeding error of any kind; these snakes fully, 100% intended to eat human children. There have been at least 11 cases of this between 1983 and 1993. That's more than the recorded amount of man-eating python incidents. Nothing is safe from brown tree snakes.

Before you suggest anything about stopping these snakes, it's too little, too late. Repeated introductions of mongoose onto snake-invaded islands have actually proven to hurt bird species more than snakes (I'll get into why when I cover habu- I've already done them as food). Guam is slowly becoming an island of the snakes. Since it's a transportation hub, however, it could easily spread to other islands like Okinawa...and apparently also Texas. Even with dogs sniffing the snakes out, it sounds like Guam itself is pretty screwed.

That's the thing about Guam's situation: It's the exception rather than the rule. Not every introduced species will flourish like this. The worst invasions are accidental introductions like this. Illegalizing the pet trade will not stop the problem. At least we know what we're shipping. You wanna stop Guam from happening again? Ban humans.