Am I the only one who has noticed that aliens are everywhere, nowadays? Hell, we have alien Pokemon - not that the implications of Pokemon coming from space weren't present since Gen I. It figures that extraterrestrials would eventually be in our base, stealin' our pop music:


(Mad props to the original creators.)

Now, if you're into conspiracy theories, you'll probably know that "E.T." is pushing not only alien invasions, but the transhuman agenda. Basically, any monkeying with a human's natural capabilities can be considered "transhumanism." That includes cloning humans, making babies glow in the dark, and so on and so forth.

And hoooo boy, does this video monkey.

The title and outer space setting are misleading (but very pretty). Whatever Katy is, she is highly impacted by the flashing videos of life on Earth. With the swirling clothes, it's not even clear that she has a stable body.  It's hard to tell what sort of thing Katy is at first, but whatever she is, it becomes something entirely different by the end. 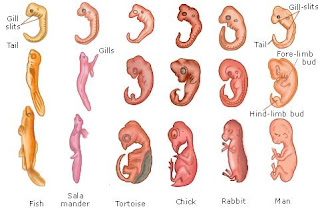 Enter embryology. The video doesn't start with a live alien; it starts with a camera shot into what we later learn is some sort of life capsule. The first Katy we see is undefined, just like an embryo. That's why we can get stem cells, or cells that can grow into any organ, from an undeveloped fetus. I may be stretching it, but it makes more sense than "OMG A RANDOM ALIEN FELL TO EARTH!" which is a wholly shallow, exoteric interpretation.

The use of videos within a video intrigued me. They cover the whole spectacle of nature, from flowers to cheetahs. Rewatching it, I saw more and more recognizable images that actually helped the microcosm grow and develop. Somebody put a lot of thought into exactly what clips went where.

These videos are not random. Most, if not all, of the video clips become obvious parts of the chimerified Katy. The order is also symbolic; the video starts with plants, a primitive form of land life, then moves onto birds (living dinosaurs) before flashing to mammals (and one lizard?). There is also a jarring instance of the Circle of Life in which a fawn is shown right before a barely-alive antelope; again, this loops back to death and rebirth, and our little embryology lesson (our body actually kills off cells as it develops). The mating monkeys toward the end speaks for itself, but has an extra meaning when shown in the context of the video. The "alien" from the start of the video becomes a strange composite of earthly beings, including humans, animals, and maybe plants.

The future shot at the end is also worth talking about. In this apocalyptic scenario, even the pigeons have gone extinct, making Katy the last reservoir for natural life. The man she finds is an android who only finds a body with the touch of an 'alien'  that happens to resemble a divine nature spirit. Presumably, life blossoms again when her and her new boyfriend do the nasty. It also shows a possible consequence of transhumanism: that humans will be so good at preserving themselves that nothing else will be left.

There are a number of ways to symbolically slice "E.T." It definitely advocates accepting the strange. It is probably pushing the 'transhuman' agenda, if only by getting us used to chimeras. At the same time, it shows us a consequence of our own dabbling: A completely barren Earth with only a few survivors. Of course, this is an interpretation; the official artist probably said something that was torn apart by conspiracy dogs.

Also, please, ignore Kanye West. He offers absolutely nothing of note and detracts from something that is otherwise interesting. Thank you.
Posted by KuroKarasu at 11:04 PM