Ever see a shrew and wonder, "what's up with shrews, anyways?" I don't mean the 'shrew' as in 'mean woman'- I mean the not-mouse that looks almost like an elongated mole. They're usually pretty secretive, so if you haven't seen 'em, don't feel too bad. Yep, this is one of those entries that makes you look at regular life differently.

The northern short-tailed shrew (Blarina brevicauda) is exactly what it says on the can: A shrew with a short tail that lives in the northern U.S. and into Canada. It is mostly carnivorous, eating insects, worms, centipedes, and other crawly things. Mice and salamanders have also been reported.

Shrews are already pretty weird animals. They have been around since the Pleistocene, i.e. the same time as mastodons and saber-toothed tigers. They're closer to moles than rodents. In case you had any doubt that shrews weren't weird, well...I feel ashamed for never covering them before. They're also kinda cute for carnivorous ground monsters.

This particular shrew can also echolocate. It also eats up to three times its body weight in a day, making it almost a hummingbird among mammals. It also caches most of what it kills. That's even weirder than most shrews. Oh, and this shrew is also venomous. 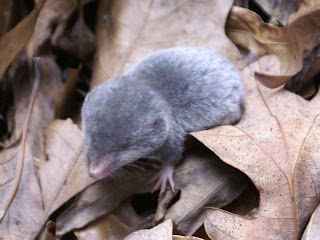 Yes, B. brevucauda shrews do, in fact, have venom. It is similar to kallikrein, a protease found in snake venom and the human pancreas; for those of you not science-y, that means the venom cuts proteins. Some suggest that it is used to subdue mice, but this is a relatively rare occurrence in shrews. It works well on most other vertebrates.  In other words, aside from being a vestigial evolutionary trait from days gone by, nobody knows for sure why these shrews have venom. I personally think nature decided to use this opportunity to laugh at us.

Why? This venom has seemingly little natural function, yet it hurts humans like a bitch. One excerpt tells of how a shrew bite caused someone's left finger to swell to twice its normal size; another time, it was a whole arm. Some people have no reaction whatsoever to it. Other feel shooting pain for up to a week.

In other words, this shrew is nature's way of trolling. There's no way to know whether this shrew will affect you or not. It's so weird that it almost sounds like a sick joke. You will never see shrews the same way again after a bite from one makes your hand puffy as a marshmallow.
Posted by KuroKarasu at 8:46 PM