Australia is both the land of weird and the one place where everything is out to kill you. Seriously, even the koalas and kangaroos are capable of leaving nasty marks, and there are few more humiliating deaths than "head smashed by a wombat's rump." Dingoes- you know, the things that eat babies - started out as dogs brought over by Aborigines, which then went right back to being wolves. The rule of thumb is, if it has a placenta, it doesn't belong in Australia. That includes humans.

Thing is, there are exceptions to every rule. 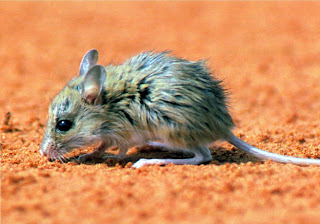 There are roughly five species of hopping mouse (genus Notomys), with five others completely extinct. Several are vulnerable. All are herbivores, feeding on whatever seeds, roots, and leaves they can find. They live in most arid areas of Australia.

Australian hopping mice are actually mice. As in, rodents. As in, they have a placenta and did not come there as stowaways with humans. That makes them weird by Australian standards. Although not the only native placentals there, these jumping mice are among the few.

Of course, this is Australia. Everything that comes to or lives on Australia becomes weird, aggressive, or both. Since diverging from the common ancestor with normal mice, hopping mice have become larger and, well, hoppier. The good news is that they reproduce a little more slowly than other rodents. Insofar as we know, they have not killed anybody, even with unintentional parasites.

In this case, the hopping mice have several similar rodents to call distant cousins. The kangaroo rat and jerboa are both desert rodents with parallel adaptations. It's not that somewhere along the line, kangaroo rats were transported to Oz; this is another cool example of convergent evolution.  Desert mice suddenly becoming bipedal seems to be a trend.

Hopping mice, like jerboas and kangaroo rats, are capable of surviving on very little water. They do not drink. They also have larger ears than most rodents; as in jackrabbits, these large ears help redistribute heat. Their urine has less fluid than that of the average mouse. Plus, they're adorable. Chalk another one up for convergent evolution.

Hopping mice are so adorable, in fact, that Australia will let people keep some of them as pets. The two species up for consideration are the Mitchell's Hopping Mouse and the Spinifex Hopping Mouse (which can already be kept as a pet in New South Wales). This study from 2010 favors keeping the Mitchell's as a pet in order to preserve the species. That's right: Even Australian customs might be letting this one slide. YAY.
Posted by KuroKarasu at 7:22 PM